As we began today, our son had conjunctivitis (pinkeye), a daughter could not hear out of one ear, and another daughter still limped from a knee injury she suffered Sunday.  By the end of the day, I’d done a clinic visit, a hospital appointment, and a good old homeopathic treatment.

We ran to the clinic for Annalise, who still can’t hear properly, first thing this morning.  We were the second people to arrive at the clinic and waited about 40 minutes for our appointment.  It was completely full by the time we left, with all the seats taken and folks sitting outside.  I was glad we’d gone early.

El Samaritano Clinic is run by a medical ministry here, AMOS Health and Hope, which is directed by friends of ours.*  Samaritano is always our first stop here when we need medical care.  It’s clean, well run, and inexpensive.  A while back, they raised the fees for foreigners.  A doctor visit became $10 (300 cordobas).  I was pleased to pay all of ten dollars for a reliable doctor and, in a small way, to help Nicaraguans afford decent medical care.

During our vist, we were the only patients who had driven a vehicle.  Though I can’t be sure, it’s a decent guess that we were the only patients there this morning who own a vehicle.  In the doctor’s office, while Annalise described her ear discomfort, I read the sign in front of me that explained the benefits of family planning (in Spanish), which included “You can choose how many children you have” and “having fewer children means more time and money for each child.”  This was addressed to someone who might never before have considered these benefits.  There were signs for new mother support groups and lists of all the prenatal services available.

As I said, I am happy to pay $10 to receive competent medical attention at a clinic that cares for the poor.  Today, I’m not sure why, we were charged only 80 cordobas for our doctor visit.  She told us Annalise’s ear is not infected, which is good news.  She prescribed some ear drops, which we purchased at a nearby pharmacy (the third we tried, as it turned out) for 30 cordobas ($1).  Our entire medical journey cost us less than $4, plus a little fuel.

Conjunctivitis is raging through our school and neighborhood like wildfire.  Our neighbors have been suffering it and we’ve tried desperately not to catch it.  We’d succeeded until this morning.  Corin woke up with an itchy, sore eye.  It wasn’t hard to diagnose, especially when we heard that the boy he was guarding at his elementary school basketball program yesterday had it.  Bummer.

We talked with Phyllis, our school nurse and a close friend, and she told us there is a viral and bacterial strain and it’s hard to tell without testing which is which.  She said the ophthamologist at Metripolitano, the best hospital in Nicaragua, is prescribing antibiotic drops with steroids.  We’ve experienced that medical personnel here are quick to prescribe, often giving us four or five different medicines to take for any condition we or our kids are suffering.  Phyllis said that another parent had tried essential oils tea tree oil combined with lavender, and had quick, positive results.  We decided that was worth a shot in case we could skip one extra antibiotic with a steroid.  We’ll see.  Corin’s eye seemed better when he went to bed tonight.

Then, this afternoon, I took Aria to Hospital Metropolitano Vivian Pelas see Dr. Dino Aguilar, a well-known orthopedic surgeon here.  Another player had run into Aria on Sunday while Aria was jumping for a disc (that she caught for a score, in fact) and the collided knee-to-knee.  Aria’s knee swelled up and she couldn’t bend it much at all.  My daughter loves playing soccer and ultimate and is in the middle of her soccer season right now.  We gave it a few days to see if the swelling and pain would subside on their own, and decided today it was not improving very quickly, so we needed to find out if she had torn her ACL or miniscus or suffered some other structural damage to her knee.

We’ve gone to Metropolitano for every serious medical issue we’ve faced, from my concussion and broken rib to Aria’s 2-month ear infection (after we tried another specialist and she was misdiagnosed for 6 weeks).  It’s a full-size, high-tech hospital, nearly everyone visiting there drives nicer cars than we have, and the waiting rooms are huge and air-conditioned.  We waited perhaps ten minutes for our appointment, which we had managed to secure this morning (and we felt very fortunate).

Dr. Aguilar, who is a very kind and soft-spoken man, ran an ultrasound on Aria’s knee.  We were immensely relieved that he found no tears, no breaks, no indications of internal damage, simply severe bruising.  He told Aria no activity for another week and then come back to verify that she is fine and can play again.  Thank God!

As we left, I discovered that I’d done our visit in the wrong order and was supposed to have gone through insurance first (not sure why the information desk didn’t suggest that, but they did answer my question, which was, “¿Donde esta la oficina de Dr. Aguilar?”).  So we sat down to find out that we had actually done the process completely wrong.  According to insurance policy, we were supposed to have taken Aria to the emergency room immediately, at the very latest within the first 24 hours after her injury.  Failing to have done so, we now had to pay for everything gastos de bolsillo (out of pocket) and we could then try to convince the seguro (insurance) to reimburse us.

As you might imagine, my efforts to explain that we had been waiting to see whether the injury actually required this level of medical attention did not inspire a change in the insurance policy.  As they explained it, since we didn’t report to the emergency room and file our insurance claim immediately, they couldn’t be certain it had happened on Sunday.  I suppose that’s true.  Or, we could have reported to the emergency room on Sunday about an injury Aria had sustained some other time.  If they lacked confidence in our veracity now, why would they be certain on Sunday that we’d told the truth, the whole truth, and nothing but the truth?  I didn’t press that point.

Out of bolsa, it turned out, was $60.  That’s not meaningless for us, but to see an excellent orthopedic surgeon and get an ultrasound, that’s an amazing deal.  In truth, had we gone to an emergency room, we would not have gotten to see Dr. Aguilar and Aria likely would not have received an ultrasound, especially if we went to any other hospital. 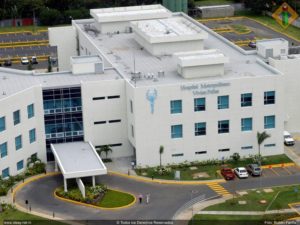 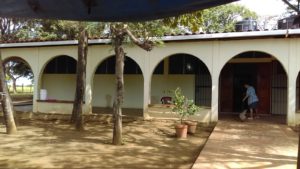 Today was a medical day and it was a strange day, yet the strange that has become normal, seeing the opposite ends of the spectrum consecutively.  But that is only on our spectrum–Samaritano is a lovely clinic and most poor Nicaraguans experience a much lower, much less professional (and sanitary) level of care.  I’ll save those stories for another time.

We’re grateful for medical care we can afford.  Yet again, I’m reminded that these things we can access when we need them are far out of reach for many of those living around us.  May we never take them for granted, ever again.

*I’ll dedicate a whole post to them sometime.  They’re amazing.