This one may sound self-indulgent.  It’s probably not what other people are writing for their Lenten reflections.  Please bear with me.  Or don’t.  There’s a lot of freedom in reading a blog.  You can stop here.  I’ll never know.  But I think I’ll have a spiritual insight or two by the end.

Today, I played on a team that won an official ultimate tournament, which was my first time since I started playing ultimate.  I’ve been playing competitive ultimate for twenty-three years, give or take.  Add another seven years that I played the less-organized, barefoot, run around and have fun variety (of course, I was being competitive then, too, but we weren’t playing tournaments).  I started playing this game at 18 and I am 48 now.  I praise God that I can still play.  And it has been a big part of my life for thirty years.

To say this was a bucket list moment for me does not begin to capture it.  I’ve shared lots of thoughts on competition and winning and ultimate on here.  They matter to me. I believe anything in which we invest our energy and hearts deeply, be it knitting or competitive Scrabble, bird-watching, gardening, or card collecting, rock climbing or chasing a piece of plastic up and down a field, becomes a part of us.  Further,

“There is nothing so secular that it cannot be sacred, and that is one of the deepest messages of the Incarnation.” Madeleine L’Engle

I just shared this quote with my senior Bible class.  I believe it (and I love Madeleine L’Engle).  Playing ultimate is a form of worship for me.  It is sacred.  I experience the joy of my Creator, of being his creation and being able to use my body that he’s given me.

“God made me fast. And when I run, I feel His pleasure. ”
― Eric Liddell

I’ve never been as fast as Eric Liddell was, nor as godly, from what I can tell, but my soul resonates with this quote.  That’s what I mean by “playing ultimate is body worship for me.”  I worship God by enjoying the physical abilities he has given me.  And as the years go on, my joy in this gift increases because I expected to be past my playing days by now.

Most of my years playing ultimate were a means of outreach for me.  I was playing ultimate and hoping the people with whom I played could see God’s love through me.  I didn’t always do great, however we measure these things, but several of these people continue to be my dear friends and few of them became Jesus followers.

Ultimate is still an outreach for me here in Nicaragua–and one of my stronger points of building relationship with Nicaraguans–but I play with a lot more Christians here than I have since my seminary days, which was pre-competitive (i.e. a long time ago).  I get to help coach the high school team, two members of whom are my daughters.  That’s pretty darned cool.

In the old days, I was often the only Christian a lot of the other players knew personally, period.  I miss that.  It was fun to shatter their stereotypes and get to talk about spiritual things without their feeling any pressure or threat (if you have a forehand huck and will lay out for a disc, you are legit, whatever crazy things you might believe about God).

For the most part (99%), playing ultimate has been it’s own reward.  It’s a secular thing that has become sacred to me.  Or, seen another way, there is no secular because God is present in everything and desires to be more so; this is my thing and a way I know God more deeply.  On a weekly basis, this is an encounter with God as, I hope, your thing is for you.  I’m not saying it’s always a mystical experience–sometimes I play lousy and lose and I’m grumpy–I’m saying I meet God on the ultimate field the way others might in church, in the mountains, at the beach, or under the stars.

And today, we won.  I’ve played in something like 60 tournaments.  I told people today 35 to 40, but sorry, I was off.  When we lived in the States, Kim and I negotiated for about 4 a year, the balance between enjoying my passion and having it take over too much of my life (and time and finances and…).  So that’s a lot of times watching another team win.  A lot of finals I watched and heckled, which is a good-spirited ultimate tradition–one guy had a megaphone today! I could hear him clearly on the field–kind of the consolation prize for folks who didn’t make the finals.*

I didn’t play amazingly today, but I played well.  I ran as fast as most** of my team and I was the oldest player.  I had some really good throws, which is the most important thing since I’m a thrower these days–“handler” in ultimate lingo–and we didn’t have many handlers.  I did my part.  I contributed.

Now here’s the thing:  I slept maybe three hours last night, possibly a few minutes more (it gets fuzzy after you toss and turn for hours).  I suffer insomnia.  I did everything I could think of to get a good night’s sleep and prayed and prayed–and spent most of the night awake, praying.  It’s bewildering, asking the all-powerful God to help me with such (seemingly) small thing as falling asleep and not being able to…for going on six years now.  I’ve had insomnia ever since I moved to Nicaragua, and didn’t have it before that…except that I’ve always had trouble sleeping before tournaments, because I get so excited.  But even then, not three hours.  And the night before that was almost as bad.

It’s funny sometimes, how God answers prayer.  I understand that people who don’t believe in God, or at least in a prayer-hearing and -answering God, think we’re very imaginative in our interpretations of God’s answers.  Truthfully, sometimes these sound pretty creative to me, too, but who am I to say exactly how God works?  I can tell you what I experience.

Today, I experienced having the energy to run hard up and down a field over the course of almost 8 hours, six games of 45 minutes each, on woefully little sleep.  Was that because I’m overcompetitive, a little insane, or because God gave me strength?  I don’t mean God “wanted” us to win.  That doesn’t work so well in my theology (and also would say something about my previous 59+ tries).  But I prayed to be able to sleep well so that I could play well.  I didn’t sleep well and I still played well in an exhausting sport under a hot Nicaragua sun chasing people half my age or less.  Yes, that strikes me as an answer to prayer.  To me, it’s a small example of God being strong in my weakness.  And somehow it feels more convincingly God’s answer that I could do that then that I simply got a decent night’s sleep and could do it on my own.  I also still suspect that there is something spiritual at the core of my insomnia, but other than surrender and learning to bear my suffering with grace, I don’t know what it is.

On one level, it’s a trivial thing, and I do get that.  Bigger things are happening.  And yet, the small things we love that keep us sane and give us energy to face the bigger things, they really do matter.

It’s funny:  I think when I wanted this in my younger, more athletic, less grace-oriented days, I wanted it to prove myself, to complete some perceived missing part of my identity, to show myself after other failures that I could be a “winner.”  No matter how hard I tried–and I tried hard; I wanted to be a great ultimate player so badly***–it never happened. 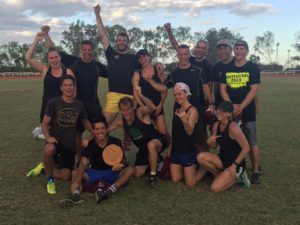 I’m the guy with the really goofy expression and the wrong fist in the air.

Today, it meant something very different.  More about God showing up in my life in unexpected ways, more about seeing his generosity to me that I can still do this thing I love, more about enjoying my teammates and less about ME…

None of them knew that it was my first time to win a tournament until I told them afterward, to thank them.  They decided I should keep the trophy.  That was extremely cool of them.  My mouth kind of hurts from grinning so much.

Having said all this, probably the bigger stories are that this was the first club tournament ever in Nicaragua, which is credit to my friend Chasen, who has been working hard to spread this sport (and the cool, God-connected things about it) here****, and that my girls’ high school team made the semi-finals and they were mighty!

Or maybe it just took me twenty years.

Next week, I’m planning to reflect on some issues of justice and injustice.  The week after, I’ll be talking about my experiences of God’s absence.  Of course, sometimes my plans change.

*I’ve played in a finals once before. I played well, as a role player, and we didn’t win.

**There are a couple guys who are faster than I ever was and a couple gals who are probably in better shape than I’ve ever been.

***It’s my fantasy someday to be inducted into the ultimate hall of fame (yes, of course there is one) sheerly for my love of the game.  I haven’t done great things in the game nor for the game; I just love it.  I don’t think they let you in for that.****http://breakingborders.org/

2 thoughts on “After Twenty-Three Years”