In my posts about sports and competition, I’ve made some references to coaching but have yet to write specifically about it.  Our Nicaragua Christian Academy high basketball team is returning from our third yearly trip to play in Costa Rica. I’m their coach.

I hated my experience of high school basketball. I’m not using “hate” lightly. There is a much longer story here, some of which I’ve related elsewhere. But since coaching has become a significant part of my life, I want to describe a little of my experience.

After having such a bitter basketball experience myself, I’d always hoped I would get the chance to coach. I wanted to give some young men a better experience than I had. I want to be the coach that I needed back then, when I was a young, insecure/arrogant punk. 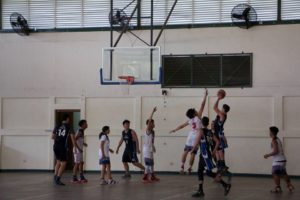 I’ll start here: the final game we played in Costa Rica we lost to the host team, 32-27. We played two games on Friday, two on Saturday, and then one more on Sunday afternoon. That’s a lot of basketball for high schoolers in 72 hours, and ours are in excellent condition. Losing is never fun—beneficial, possibly, character building, definitely (assuming we let it be), but not as enjoyable as winning. Winning is more fun.

The problem with this particular loss was with the other team: not that they scored more points than we did but that they were…ahem…unsportsmanlike. They cheated. Playing physical is one thing, but they broke rules whenever they could get away with it. They used profanity and vulgarity to try to get an advantage. In a word, they were…ahem…character deficient. 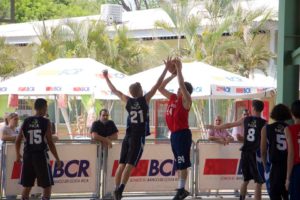 In contrast, we played a game against a school from Panama the morning before and lost by 19 points. Nineteen points in basketball is a slaughter. It was both a much better game and a much more enjoyable experience. In fact, I think it was our team’s best game of the year in terms of effort and performance (and we’re 9-3 this year). We earned the other team’s respect, even losing by so much, because of how hard we played and that we kept attacking every second of the game. Two of their players were much better than anyone on our team and, to my knowledge, better than anyone who has played for our school, ever.*

Losing a close game when we don’t play our best (largely due to exhaustion) against a bunch of…attitude-challenged young men tastes bitter. Actually, it tastes like bile.

But this is what I want to tell you about our guys: they did not respond in kind. They did not make rude suggestions about their opponents’ mothers. They didn’t grab jerseys when the refs weren’t looking. They just played harder. Our guys always play harder. 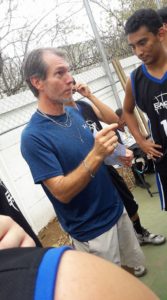 Wearing everyone’s bling during the game because they’re not allowed to.

I hate losing as a coach, largely because I don’t ever want to let our players down. Do coaches cause games to be lost? Sometimes. It’s rarely clear when it happens, but so many decisions could have been made differently. I for one do a ton of second-guessing after a loss (and after some wins). In a close against a team of…jerks, I can’t help but wonder if I should have subbed differently, altered strategy, recognized what we weren’t doing well sooner and called for more adjustments. I’m not a great strategy coach.

My strengths are relationship with the players, motivation, and conditioning. I know how to build a cohesive team that can run a full-court press hard for a whole game while fighting for every rebound and diving for every loose ball. I’m pretty good at helping our guys discover what they’re capable of, which is invariably more than they thought. I am decent at teaching and reinforcing the fundamentals so that our guys do them automatically in games. 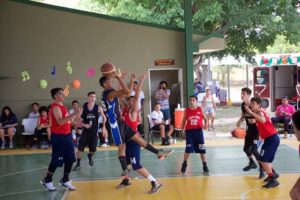 Alex not swimming on the floor.

On one play, Alex went for a steal. He knocked the ball away, lunged to pick it up and lost his footing. The ball rolled slowly toward the end line and the other player scrambled to regain possession while Alex kept hurling himself forward, swimming on the floor to get to the ball first.

That is the character of our team. They throw in everything they’ve got and wring every ounce of ability and talent out of their (mostly) skinny frames. Before every game, we shout, “Every loose ball is—OURS!” Every coach has a main focus, spoken or unspoken. Ours is all-out effort, every minute, defense and offense, because while we can’t make ourselves more naturally talented, we can try harder. This team has gone beyond what I could have reasonably hoped; they embody giving it all.

It’s only a game. At the end of it, one team has put a sphere through a hoop more than the other and everyone walks away to continue their lives.

But this weekend, this 5-day weekend, we got on a bus together and traveled from Managua, Nicaragua to Liberia, Costa Rica, laughing and joking and telling stories. We shared meals together, played jokes on one another in 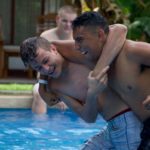 motel rooms, wrestled in the pool a 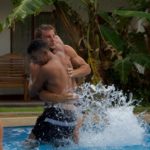 nd, every now and then, stumbled into profound conversations. More mentoring and character-development happens on these trips than a month of Sundays, as the saying goes. 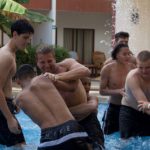 We also get to see some of the fruit of a long season (we started in January but had intermittent scrimmages starting in October). For example, we had not won a single game in our first two years at this Costa Rica event.  This year, we played four games hard, lost two against teams we would probably lose to five out of five times, won two by a lot, and when we finally played a game against a team with which we were somewhat evenly matched,** we ran out of gas and lost in a heartbreaker…to a bunch of, well…I can’t imagine their mothers and fathers would be proud if they knew how their offspring behaved. I hope not.

But I was incredibly proud, in the absolute best sense, that our young men never gave up, never turned on one another, never sunk to the level or tactics of their opponents, and after giving everything they had left and coming up short, accepted it and moved on. I didn’t even know how poorly the other team behaved until we were back at the motel, sitting around eating pizza and debriefing. One ref threatened to give Barry a technical foul–“Do that one more time and you’ll get a tech.” Barry had no clue what he’d done wrong. It turned out the ref thought Barry had told his opponent to perform sexual acts on him instead of vice-versa, as actually happened. 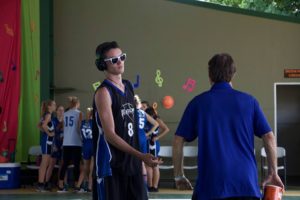 Spencer, hearing his own drummer.

In this sense, it’s not only a game. The fruit we see is not merely winning, fun as that may be.  Basketball, and all sports, are a means of worshipping God with our physical abilities. Sports both bring out who we really are and can develop our character, if we let them. Sitting around talking with them about what their team did, what we might have done differently (strategically, not profanely), and remembering our best plays, reminded me what great young men they are.

Spencer, Josh, Andy, and Will helped me feel better about our loss. I was still trying to figure out if I could have changed the outcome with greater coaching brilliance (as Alejandro pointed out, “We’ll never know now.”), but they got me laughing and explained what *cough*…charming opponents we’d faced and reminded me of what I really do already know—we have succeeded at the more important things. We’ll graduate four seniors—four of my favorites, but shhh! Don’t tell the others—and they are solid young men. The basketball team didn’t do that, but we contributed. I wouldn’t trade that for one more win in Costa Rica, nor for any number of wins.

Carlos, our great bus driver for this trip, as we loaded the bus for our return trip, told me how he appreciated all the enthusiasm and encouragement I have during our games. He wanted to know what the words “good job” mean, because he’d heard me shout them so often. Then he told me, referring to yesterday’s game, “You lost the battle, but not the war.”

Wisdom. That was a timely reminder, as we look ahead to our final 2 or 3 games of the season (we have a Copa to finish) and to next year with our younger guys.

But I think I would say that yes, we lost that game. 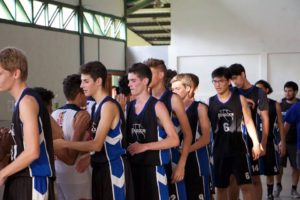 But no, after spending five full days with these young men, we are winning both the battle and the war.

P.S.  I guess I have to add this:  I know a lot of basketball players “talk trash” and cheat and do whatever it takes to win, including at the highest levels.  I’m not naive.  But a lot of people do all kinds of horrible things; we’re not joining in.  The Kingdom of God works this way.  It’s like a mustard seed or a little leaven…

* I watched one of them walk out to the basket wearing slides (those open-toed sandals that slip on but aren’t flip-flops), take one step and dunk two-handed. None of our guys can even dunk, though some sure try hard.

**I strongly believe we would beat them at least 3 out of 5 if both teams were rested.