Please read my self-descriptions in that “laughing because it’s so ridiculous” tone of voice.

Last night, my knee started to get stiff.  I’m forty-seven and I played basketball in our gringo-nica-middle eastern pick up game Tuesday night, so I thought I might have wrenched it and was just getting the delayed reaction.  You get older, you still play hard, everything hurts.  Fair enough, that’s the price you pay.

But the knee kept getting worse.  I iced it for a long time, and then could barely stand up.  Dang!  What did I do to my knee?

Then I noticed that I wasn’t feeling right: a little feverish, a little dizzy.  I suffer from insomnia, so honestly I’ve gotten used to mild symptoms like that.

But next I seriously had to plan out getting up, figure out which direction I could push so that I didn’t have to use my right leg at all, and why are my shoulders hurting so bad and–uh, oh.

I had surgery on my right knee, many moons ago.  The surgeon had planned to do arthroscopic surgery to remove two bone chips, but one of those pieces of bone was much bigger than anticipated, so what was supposed to be two tiny incision points and a laser turned into a connect-the-dots-and-open-wide game on my leg.  I only found out when I took the bandage off and saw the long scar, many days post-op, because apparently the doctor had told me…when I was still under anesthesia.

So, my knee feels just like it did during physical therapy post-surgery.  It hurts like crazy to bend, I have to move it manually sometimes, and–

When Kim got chikungunya, she woke up one morning with terrible knee pain.  We couldn’t figure out how she injured it so badly while sleeping.  She limped severely for a few days…and then the rest of the symptoms arrived.

i didn’t injure my knee in some bizarre 24-hour delayed reaction.  I just have–oh, crap.

Now that I’m forced to admit it, I also had a rash on my trunk several  days ago.  But come on, there are so many rashes available here! (Denial) It didn’t have to be chikungunya. (Denial)

Last night’s “sleep” was an adventure in positioning: I’m freezing, I’m boiling, my knee needs to stay propped but now my shoulder is yodeling, is on my side bett–NOPE! What?  My finger aches?

My wife had chikungunya back in October, and survived it with grace and a bare minimum of whimpering.  But she also missed three consecutive days of school, and she simply never does that.  I mean, never.  Until this stuff.

You’ve certainly picked it up, but here’s the scary part of chikungunya for a guy like me:  it lets you relive all your injuries.  I mean, first-hand, genuine pain and swelling and authentic immobility.  That stupid finger I jammed a couple weeks ago–it’s like it just got hit last night!

In Voyage of the Dawn Treader, the Narnians discover an island where dreams come true. 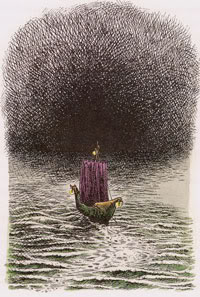 Initially they’re delighted–until they grasp that it isn’t where their daydreams or fondest wishes come true, but all those horrible, sub-conscious fears and freaky, surreal combinations of different parts of life.  Now follow me here: the puzzling thing about pain is how, when it’s passed, you can’t fully grasp how bad it hurt.  It’s like it recedes into the fog.

Now imagine all that wonderful pain proceeding out of the fog to pay a visit!

It’s a mosquito-borne virus, so when the mosquito bit someone else with it and then bit me…
The odds were not in my favor; sooner or later, some little Aedes mosquito was going to take a nip out of Kim–or one of the thousands of other folks who’ve suffered it–and find its way to me.

Chikungunya is rarely fatal.  Only if one’s system is extremely compromised initially will it be life-threatening.  Tragically, many Nicaraguans in slums live at a lower-than-optimal level of health, so it’s likely more dangerous here than it would be in a US suburb.  It’s been in the news constantly, and the ministry of health has workers all over the city doing this: 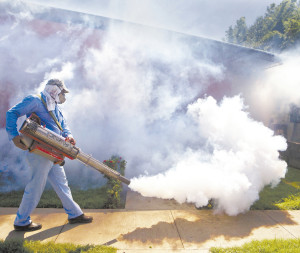 A health ministry worker fumigates for mosquitoes that transmit dengue and chikungunya in Managua, Nicaragua.

What are they spraying?  We’re not sure, but it smells a lot like diesel.  Would you rather have the risk of chikungunya and/or dengue or have your children breathing those clouds of (I’m going to take a leaping guess here) toxins for the next several hours until the air clears again?  You can tell them “No, gracias,” when they ask to come in and spray, so then it’s only the fumes blowing in from the street and the neighbors.

I’m going to end with a few quasi-serious reflections.

•I’m not freaking out over this.  It’s inconvenient, and there is no cure (just addressing symptoms), but I’ve watched Kim and many friends, both Nicaraguan and gringo, suffer through it.  I’ll be okay.

•It’s also fair to say Kim and I would not have experienced chikungunya if we hadn’t come to Nicaragua.

•This hurts and I’m not enjoying being in pain, but even if my symptoms last the maximum time, it’s still temporary.  I know people, I have friends, who live in chronic pain.  They carry on with grace and good humor and generous hearts.  In this moment, while I have a tiny glimpse, I respect their choices, every day, to develop that character.  I’ve seen a chronic illness not always handled with grace, and those choices can make all the difference.

•Even saying this, I also get that the temporal piece is so far beyond my grasp.  I’m fine, and trying to laugh, largely because I know this is going away.  For someone to accept that, barring a miracle, this level of pain is the daily dose, that takes some powerful character and/or faith.

•Finally, I come back to how fortunate and privileged I really am.  I have a comfortable bed and nice pillows, I have clean drinking water and all the ibuprofen I need.  A Nicaraguan friend whose wife had chikungunya recently asked for some acetaminophen.  He had just done a small job for me, for which I had paid him, but he’s unemployed and would have had to decide between buying medicine for his wife and buying food with that money. Putting twenty tablets in a baggie for a good friend is the work of six seconds and doesn’t require even a second thought for me; the cost to me is negligible and I’m grateful for the chance to help.

Being sick drives home this point for me:  We are rich and have the comforts and protections that come with wealth.  My health is not compromised.  I’m going to limp around for a while and then I’ll be fine.  I hope I’ll laugh the whole way.