I once had a friend, when talking with me about his marriage, say, “I was going to ask you if your wife ever [insert negative here] but then I thought, ‘No, she never has.'”  He was right.  She hadn’t.  I’m not saying my wife never does anything negative.  But the issue he had with his wife, which if memory  serves was around being passive aggressive and manipulative and maybe a vampire, my wife had never done or been.  My wife is neither awake during the night* nor undead.

But this also means not all of my experiences will apply.  Some things you assume must be true of all marriages probably aren’t true of mine.  That doesn’t mean ours is broken; it’s just different than yours.  At times I hear something about a friend’s marriage and think “Why don’t we do that?”  More often, I hear something we don’t do and think “Thank God, thank God, thank God!”  (Obviously not about you, Dear Reader.)

I make a big point of this because I’d guess what I’m going to describe will sound familiar but may look a little different for you.

Kim and I love each other.  We’re coming up on celebrating our 25th anniversary and have been in this relationship for thirty years.  We’ve have loved hard and determined for a long time now.*  I’m almost fifty and three-fifths of my life has been given to this one relationship.  I have no regrets whatsoever about that.  None.

Having said all this, Kim and I don’t always like each other.

I’m a pain in the butt.  Everyone who knows me for any length of time knows that.  No one is surprised to hear that some days Kim has a hard time liking me.

Some days I don’t like her, either.  Yes, she’s a saint.  It’s not always easy being married to a saint.  My saint doesn’t always have a an easy time seeing when she’s wrong.  Fortunately, that’s only about one in ten times, but those times are difficult.  They happen.  Over twenty-five years, thirty years, they happen.

We’ve learned, over time, not to spend much effort assigning blame.  It doesn’t bear much fruit.  Most of us want to be vindicated and that involves getting the other person to recognize and acknowledge what was their fault.  I would say occasionally, maybe rarely, this helps.

Hear this:  I take responsibility for what I’ve done wrong and I apologize.  I apologize a lot.  Frequently.  Daily.

I’m not saying “Don’t worry about when you’re wrong,” much less “Don’t admit it.”  That would be in my post of best ways to kill a marriage fast.

I’m saying when neither of you agrees about what was whose fault, digging relentlessly into that is probably a bad idea.

When Kim and I don’t like each other, it’s akin to a smoldering grassfire.  Those can burn down, the heat dissipates, and they run out of fuel.  Or a strong wind blows up and that same little fire can spread to the forest and burn through thousands and thousands of acres.  I’m from Washington state; we see this annually.

In my opinion, always needing to figure out whose fault everything was creates a strong wind.  Twenty-five or thirty years (or even two or five) makes for plenty of fuel to burn.  You can’t avoid that.  You’ll hassle and irritate each other over time.  Even saints have bad days.

The question, then, is how do you keep from blowing little sparks into raging fires?

I’ve never seen a forest fire in Nicaragua.  We have plenty of forest.  It’s also wet here.  There’s a dry season, but living in the tropics, the forest-y parts stay pretty green, even in dry season.

Continuing my analogy, if looking to assign blame is the wind that blows the fire up, simple kindness is the moisture that protects against fire spreading.

We lived in a semi-arid region for over a decade; we’re now in our 7th year living where we get 110x more rain.  The difference is mind-boggling.  If you haven’t survived the Eastern Washington smoke, you don’t know how brutal the impact of those fires continues to be for months after the fires themselves are “controlled.”***  You don’t have to watch your house burn down to suffer their repercussions.  A lot of houses burned down.  But everyone else breathed toxic levels of smoke until the first rain or snow finally fell, months later.

One summer, a massive, season-long, catastrophically damaging fire got started when some teenagers were playing with fireworks.  It hit some dry grass and weeds, the wind blew, and millions of dollars of damage resulted.  Central Washington bans most fireworks and even campfires for long stretches because the threat of fire runs so high.

Nicaraguans also love their fireworks.  I mean love them.  They spend more than they can afford on them and shoot them off from December 1 to January 1, non-stop (come visit if you think I’m exaggerating here).  But we don’t have forest fires in Managua, even though the rain stops falling at the beginning of December and won’t return until May–by which time we’re praying hard for it.

At the risk of growing too fond of my analogy here, we choose both

1)whether we make the wind blow strong by looking to assign blame and making certain the other person Knows. When. They. Were. Wrong. or seeking to accept responsibility while forgiving freely and simply letting things go.  Not everything has to be settled and resolved with forty-six percent of the blame placed on you, twenty percent for the kids and a mere thirty-four percent on me.  That’s the wind.  That blows.

2)whether the grass and trees and undergrowth are green and lush and can safely withstand sparks, by showing kindness and patience and gentleness even when the other person is wrong or, I’m going to say most importantly, EVEN WHEN WE KNOW THE OTHER PERSON IS WRONG AND WON’T ADMIT IT.

That is certainly the most difficult time to be kind for most of us.  We’ve just had a fight, you were wrong and a jerk, you won’t admit to either, and now I’m going to look for ways to serve you? Yes.  I am.  I’m going to pray for grace and extend grace. ]Because I want this marriage to last fifty years, not twenty-five.

My other choice, the dry ground, is to refuse to budge when I know I’m right.  We may stop talking about it, but I’m not letting it go.  Those add up.  They feel justified and they add up.  They dry things out.  They create tinder and kindling everywhere.  Those fireworks the kids shot in Wenatchee would have done no harm in Managua.  We choose, daily, whether to create an environment in which conflict can burst into something horrible and frightening or simply splutter out with no harm done.

No one likes each other every day for twenty-five years.  Or if anyone does, I haven’t met them.  Conflict happens, frequently for some, rarely for others, but conflict itself isn’t and needs not be a threat to relationship.  Avoiding any conflict, in my opinion, is dangerous and unhealthy.  Doing so really just means we’re storing them up for later.  Later won’t be pretty.

Therefore, we create an environment of kindness and grace so that any given conflict is only that conflict and not everything that has ever offended either of you since the moment you met.  We discuss things and let them go.  We keep serving and caring for the ones we love, even when we have trouble liking them. 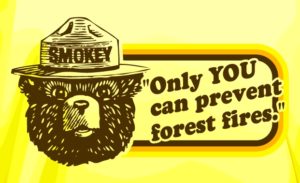 *If she is awake during the night, that usually means I’ve messed up.

***Unless, of course, you’ve lived in a really bad air pollution environment, like we did in Los Angeles in the 80’s or my friends recently did in China, when the majority of days are smog alerts.