Last night I got home from Costa Rica.  It’s raining.  Our street, which is packed dirt, has been soaking up the rain, getting saturated, preparing to become mud and ruts.  As we try to unload the car there are puddles everywhere.  The carport roof has leaked, again, and pieces of the ceiling are hanging down in strips.  Again.  Everything is soaked.

And we have no water.

Of course, we have water everywhere, just none running through the pipes.  I know it’s only a “coincidence” and there are other times people go without water here–some go without running water all the time–but every year when rainy season arrives, the water seems “coincidentally” to stop.  I suspect the downpours cause damage to some part of the city water system.  Our whole barrio is currently without water, as verified by our friend and neighbor this morning, who wanted to check if we had water (both to see how we are and to verify that it’s everyone).

Dry season just ended a couple weeks ago.  It ended early this year and we rejoiced.  People literally danced in the first rain of the season.  When we prepared to move here, I had steeled myself for rainy season, which I thought would be the hard time of year.  Like so many other things about moving to Nicaragua, I had no idea what was coming.

In Nicaragua, the rain falls from May until November.  October has the most inches of rain on average, and then the dry season begins sometime in November.  November, December and January are beautiful here: cooler, a nice breeze, an occasional sprinkle, and everything is green and beautiful because we’ve just had half a year of rain.

But even that much rain eventually dries up.  The green starts to turn brown.  The dust starts to pile up.  The temperature rises, slowly, inexorably, and you don’t feel like the frog in the kettle because, by mid-March, you know darned well you’re boiling but you’ve got about two months of hotter weather to go.  You start choking on the dust when you walk along the dirt roads, where cars and buses kick up actual clouds that can envelope you.

We happen to have an outdoor (covered) kitchen, which we love. It doesn’t get as hot as an indoor kitchen nor does it heat the rest of the house, which really isn’t a big need here.  However, during dry season, we can wipe off the counters at the start of a meal, resulting in blackened cloths, and then wipe them down at the end of that meal and they will again darken a rag with all the accumulated dust.  If you leave the floor or the counters for an entire day, by the next day you can see footprints (technically, cats’ pawprints on the counters).

We don’t like dry season.  It’s too hot.  Oh, and sometime in February or early March, the humidity starts to return.  Yeah.  So it’s “dry,” in the sense that rain doesn’t fall.  But it’s no longer a “dry heat,” like we always brag about in Central Washington.

Now, as with basically everything in our lives here, if we are uncomfortable, the people living near us in poverty are suffering.  If we are inconvenienced, they are experiencing actual hardship.  Our kitchen is outside and our house is, relative to Nicaragua construction, sealed.*  Dust still seeps in.  That means our neighbors, whose homes are built of scrap metal, scrap wood and whatever concrete they can afford, have almost as much dust inside as we have outside.  I’m not describing a cleaning inconvenience here.  Breathing that much dust, every day, is terrible on their lungs, especially for those who already have pre-existing lung conditions.

We’ve learned to prefer rainy season.  Unlike what I pictured, the rain doesn’t fall all day and the skies aren’t grey for weeks at a time.  Usually the rain falls for an hour or two, and the skies then return to a gorgeous blue.  The rain freshens the air and beats back the heat.  When the rain does fall, it isn’t even cold.  As our dear friend who moved with us here first pointed out, walking when it’s not raining and walking when it is raining are approximately the same: you’re soaking wet either way, but rain water is nicer than sweat.  It’s just that your shoes will squish in the rain.

We love watching the world become green again.  You can almost see the flowers and trees and grass start to grow again before your eyes, like stop action photography.  The joke is that if you plant a dry stick in the dirt, tomorrow you’ll have a growing tree.  Glance at that fence post photo again.  The post is sprouting!  Plants that we were sure had died revive in a day.  If only we all recovered so quickly.

It’s still hot in rainy season, and if it goes longer than two days–no, really longer than one day without raining, it starts getting crazy hot and miserably humid.  But that doesn’t happen too often, unless we’re having a drought.  We had one late in rainy season last year; it was hardest on the farmers and on people who already struggle to afford rice and beans.

But rainy season itself also brings hardships.  We have a lovely tile floor in our home (I’ve yet to enter a home in Nicaragua and find carpet), but many of our neighbors have dirt floors.  In the asentamientos, few people have tile and many people live on an incline, meaning that the water will run into their homes.  Neighbors pile up sand and debris and sand bags if they can afford them to fend off the flooding.  I’ve been driving in a rainstorm here and found my tires half submerged in a matter of minutes.  That was on a four-lane highway with decent drainage.  When the rain comes hard, the floods are almost instant.  Flooding dirt floors.  Mud everywhere.  And insects.

Rainy season also brings back the mosquitoes.  They’re here all year long, of course, but they breed more heavily when it rains. We watched the news channels freak out last year over zika.  Zika is nasty,** don’t get me wrong, and dangerous for pregnancies.  But here is the world I see:  travel alerts and panic and many frantic discussions of whether or not people should travel to Nicaragua and other Central and South American countries because of the threat of zika.  Is it getting into the U.S.?  Are people at risk because someone might be carrying it from here to there?  Is there going to be an outbreak?

Pregnant women live here.  They are exposed all the time.  I understand people fear an outbreak, but if so, how do we feel–how do we respond–for the people suffering an outbreak?  I’ve described the attempts to kill mosquitoes with smoke blowers that expel clouds of what smells like diesel smoke with perhaps some insecticide.  That can’t be healthy to have fill your house and cover everything inside.  Yet if you had a choice between breathing harmful fumes and risking severe damage or death for the baby you were carrying, which would you choose?  Zika can harm babies in utero, and that is terrifying for expecting mothers.

Otherwise, it ranks well behind dengue and chikungunya in how much misery it causes.  I don’t mean to brag here, but I’ve tried them all (I think) and zika just doesn’t pack the same punch.  And if you’re asking yourself–or me, implicitly–“Then why would you live there?” my point, again, is that most Nicaraguans, certainly most living in poverty, don’t have that choice and never will.***

Of course, rainy season brings mud, and setting aside the threat of flooding, mud presents its own challenges, especially for driving.  We have roads that are perfectly passable during the dry season that become off-roading challenges or simply impassable after a month of rain.  Recently the road crews returned to grate and level the dirt road in front of our home, about two years after they last came and dug it up.  We were glad to see them.  But I’m also curious to see how long it stays flat and level.  Any bets? 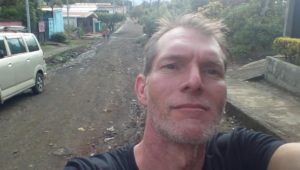 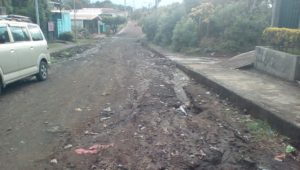 Mud is also messy (by definition?) and we have all the mud-caked clothing that a fourth-grade boy can provide, plus three of us who play ultimate, run up and down a soggy field, and come home soaked.  My forty-eight year old legs and back vastly prefer the soft field to the dry season’s concrete version, not to mention how much skin remains on our bodies when we dive or fall in wet grass versus on patches of hard, cracked dirt (and dust).  So in this, too, I’m happy to see rainy season return.  We just have to deal with muddy clothes and shoes and bodies.

You know what’s great for that stuff?  Running water.

Praying that it comes back soon, for us and, even more, for our neighbors.

PS Today was the third day without water, as of when I started writing this…AND IT’S BACK!  Only God knows if it will last, but we’re washing clothes and taking showers while we can!

*We would freeze if it ever got cold and we needed to keep heat in.  It’s not sealed by standards of a cold weather climate, but how does that saying go?  “It will be cold here when…freezes over.”  (Not in any way equating this to Hell, I’m just saying it won’t ever get cold here.  You get it.)

**If you read that CDC info site about Zika, my doctor friend says about those, “It’s interesting because all their suggestions for prevention are too expensive or not feasible for many Nicaraguans.”  This simply underscores the difference between health care and prevention for the well off (most of us) and those living in poverty.  She adds that there are creative resourceful solutions that the community has themselves, such as natural repellent.

***If you really want to know why we live here, the back issues of this blog will fill you in.  And if you weren’t asking that rhetorical question in your head in the first place, by all means, proceed to the next paragraph!  😉