Of the people whom I have met in person, the one whom I respect perhaps more than any other died last week.  Elie Wiesel was a Holocaust survivor, a prolific writer, and Nobel Peace Prize winner.  He was 15 years old when the Nazis sent him to Auschwitz, and later Buchenwald.  The Allies liberated Buchenwald in 1945.  If you don’t know who he was, or if you do and want to hear some of his thoughts and memories, listen to this interview.  If you haven’t read Night, I believe you should.

TERRY GROSS: Why have you made it your life work to bear witness?

ELIE WIESEL: What else could one do, having gone through certain events? I believe a human being – if he or she wants to remain human, then he or she must do something with what we have seen, endured, witnessed.

We are faced with horrors.  I don’t think the world has gotten worse in the last week–we may be myopic if we suspect it has– but the United States has just witnessed horrible, public tragedies, violence committed by police officers against black men, violence committed against police officers by a black man. I’ve already shared some of my views about our racism.  Choosing sides as if one is right and the other is wrong strikes me as inhuman and certainly contradicts following Jesus in any way I could comprehend.

Trevor Noah, the current host of The Daily Show, said this:

“You know, the hardest part of having a conversation surrounding police shootings in America, it always feels like in America, it’s like if you take a stand for something, you automatically are against something else,” Noah said during his broadcast, which was taped before the events in Dallas.

“But with police shootings, it shouldn’t have to work that way. For instance, if you’re pro-Black Lives Matter, you’re assumed to be anti-police, and if you’re pro-police, then you surely hate black people. When in reality, you can be pro-cop and pro-black, which is what we should all be.”

I also recommend the entire monologue from which this quote comes.

I experience white privilege.  I know some people hate that term. I think it’s accurate.  The very fact that I have choices in how I respond–or don’t respond–points to my privileged position.  I can ignore all of this if I choose, and it will not affect me directly.

That beings so, do I have any right to say anything in response to Alton Sterling and Philando Castile’s killings? 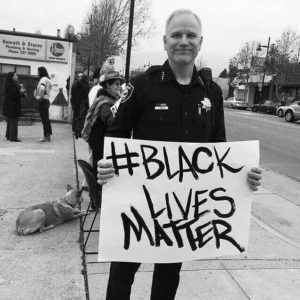 I have never been a police officer.  Frankly, I doubt I would have the courage or the ability to remain calm and make right decisions under such pressure and threat.  As I’ve said here before, a life-long friend of mine is a policeman and I have the utmost respect for him and for the work he and his colleagues do.  His life matters to me, and the fact that it might be threatened sheerly for his efforts to protect his community is an outrage that I must speak against.  I know not everyone feels protected by the U.S. police.  I live in a country where police protection is often dubious, at best.  I do believe it is our police departments’ responsibility to address abuses of power among their own members.  Having said that, I am extremely grateful for the work U.S. police do keeping the peace, particularly because many of them put themselves at severe risk to do so.
I know this:  hatred sows more hatred and begets violence.  Every one of us can do something to change the current atmosphere, this storm of rage and violence and killing.  I know many of us feel helpless in the face of it all, and it’s easy either to despair or grow cynical.  It’s also easy to lash out, in either direction.
Pray.  I don’t care if you don’t believe in prayer (did I say that out loud?), take the chance to ask someone to help.  Honestly, can it hurt?  If you just can’t, I understand, but if you are a Christian, this is the time.  Fast and pray.
If you are not directly involved, get to know someone better who is.  Yes, that may come across as patronizing or awkward.  Someone might reject you.  OR, you might develop a deeper friendship and understand a little better from a perspective other than your own (and all the folks who agree with you).  Similarly, think about whom you already know who might have more personal insights into Black Lives Matter or violence against police than you do.
If you’re reading this and you do have a more personal, direct understanding, if you are black, if you are a police officer, if you’re less white privileged than I am, teach us.  Share your perspective.  No, not everyone will listen.  Some people are not yet enlightened and awake.  But try.  Please.  Help us.  Help us to understand.  Help us to help, and not just talk with our heads up our…  Some people will listen.
Speak up as a citizen.  Tell your elected officials that you want to see change.  Ideally, you would do this after you’ve learned more and have an educated grasp of what change would help most.
Here’s the big one, and please, I beg of you, take this seriously:  love more.  Love yourself more.  Love yourself honestly and look at your dark side.  A few days ago, I broke my rule and read a bunch of Facebook comments on some political posts.  Within five minutes, I was convinced that most people are rude, hateful, arrogant and narrow-minded to the point of being blind.  That’s not actually true, thank God.  But a bunch of people feel free to call strangers horrible names because they disagree politically, as if that will help.  But of course, they aren’t really trying to help, they are simply venting their spleen.  Sowing hatred and enmity. Most of us aren’t writing those things–we aren’t, right?–but we’ve all probably got some of those thoughts and beliefs concealed in our hearts (except my mother-in-law, I suspect).  Bring them into the light.  Expose them and love yourself enough to rid yourself of that.
Then love others more.  I don’t believe Jesus was naive, I don’t think this is naive.  Jesus lived in a violent, divisive, racist atmosphere.  He didn’t say those things about loving one another and loving our enemies on the set of a 50’s sitcom.  Make choices to express love and kindness and forgiveness and grace.  To strangers.  To friends.  To family.  To enemies.  Overcome hatred with love.
It’s going badly.  The status quo is scary and getting scarier.  This is not the time for us to bolt our doors and say, “It’s not my fault,” or “I’ve done my part.”   An angry, violent, seemingly self-loathing man killed forty-nine human beings in a night club in Orlando.  It was an act of terrorism–he’d pledged allegiance to ISIS–and a hate crime.  That was less than a month ago.  But it’s not in the headlines anymore, because we have more recent tragedies and violence and death.
I believe God is bigger than all this.  I also believe that God’s means of changing the world–always–is through people loving one another.  That’s his thing.
Tonight on my Facebook feed I saw this.  Opposing protesters crossing lines, hugging, praying together.  At the time of this writing, it had 42,000,000 views.  Why?  WE ALL WANT TO SEE THIS!  We all want to figure out what to do!  No, those moments of grace didn’t solve the problem, but I believe, I believe they are part of the solution.
We’ve got to love one another.  I don’t know how, exactly, and I’m still failing at this with some people in my life, but today we’ve got to try. As John’s first letter says, “…let us love, not in word or speech, but in truth and action.”
Coming back to Elie Wiesel, my friend Morgan and I heard him together when he spoke to a small gathering of us before addressing an auditorium full that night.  Morgan wrote me, ‘I remember him saying that he thought a good measure of a person was ability to experience gratitude.”
Wiesel also wrote,

The opposite of love is not hate, it’s indifference.

I’m guessing that none of the the readers of my blog are big-time haters.  But are we indifferent to others’ suffering when it does not touch us directly?  Do we feel grief and misery for a day or a week and then return to our lives?  Do we experience gratitude for these lives and desire to allow others to live such lives, too?
Are we, each of us, bearing witness through whatever means we can, in whatever way God makes possible?
Because we have to change this.  Lord have mercy, we must try.
Here is a great and challenging blog post by my friend Laura, exhorting us to do something practical: speak up.
Here is a deeper look at saying “All Lives Matter” versus “Black Lives Matter.”
And here is where you can learn more about Elie Wiesel.