There’s a legend in my family that  a certain sister once said, “I’m not Irish, but my mom is.”  Apocryphal or not, it’s become an oft-repeated quote, part of our joyful litany that will, sooner or later, be quoted when we gather together after long absences.

I am Irish.   Loudly and proudly I have claimed my Irish roots since I was a teenager. I write in “Irish” where forms ask if I’m “white.”  I read Irish history.  One of the moments I loved most on our recent trip was having time after our tour of St. Patrick’s Cathedral to ask the tour guide lots of questions about Ireland’s history as well as current politics and culture.  She filled in some holes for me (according to her, Sinn Fein is now completely separate from the IRA, which is disbanded, not just wink, wink “disbanded,” but actually gone).  I learned that Ireland is now receiving a signficant number of immigrants, which Kim and I also experienced during our travels.  This is wonderful news for Ireland.  It means Ireland has become a country to which people move rather than from which people flee.  In recent years, Ireland has suffered a recession, but literally everyone I asked told me, cautiously, that they now see signs of recovery.

Walking through Dublin is walking through a thriving, crowded, active city.  It’s not accurate to say “a pub on every corner,” as that would underestimate the pub count by about two-thirds. Though it sounds like I’m exaggerating, it’s difficult to hyperbolize the relationship between drinking, drinking establishments, and the Irish.  When they chose the harp as their official National symbol, Ireland had to get permission from the Guinness family–yes, that family, and, I learned, a tremendously generous and civic-minded family.  The Guinesses agreed…if the goverment would be so kind as to flip the harp over.  I kid you not. 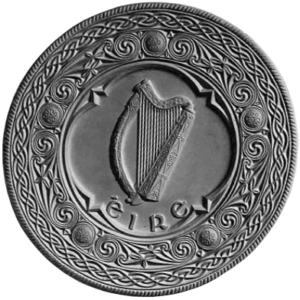 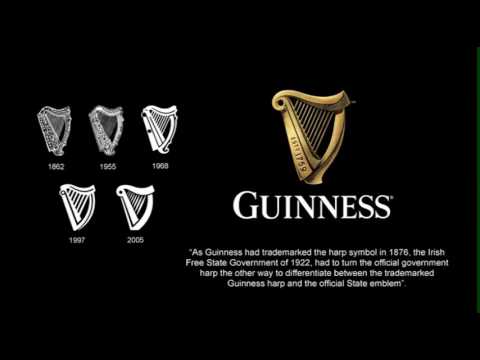 I won’t pretend to give some exhaustive, definitive treatise from my seven whole days in Ireland.  We learned some troubling facts while visiting.  The rates of mental illnes, depression, and the incidence of suicide are very high in Ireland.*  It rains a lot and people suffer seasonal affective disorder. We heard that 40% of Irish schoolchildren are overweight.  I’m doing more research, trying to understand better.

Anecdotally, Irish are friendly and helpful to visitors, more so than Americans are to their tourists.  Irish give directions as freely as Nicaraguans, but much more accurately.* Several times when we were lost we would look around distressed and someone would come up and help us without being asked.  Trying to find our way to Trinity College, we merely glanced up from our brochure map and instantly we got help from both sides:  a college woman and an older gentleman coming in on our left and right.

We saw an art exhibition on the Great Famine entitled Coming Home: Art and The Great Hunger.  I felt very fortunate that we visited during its showing.  I’ve always wanted to go to Ireland, but not solely for sightseeing; I’ve also desired to understand my own history, why our family left.  I learned.

Over a million Irish starved to death in the Famine.  One million people at a time when the entire population of Ireland was eight million.  Half a million more died from related diseases.

Another million tried to reach the U.S. and Canada. Our ancestors lived in County Armagh and County Tyrone and in 1860 sailed from Belfast–we think. This is from my cousin Cricket Hackman, who has studied our family geneology:

Henry Donnelly and Jane “Jennie’ Mullen” Donnelly had one child when they boarded the ship to America.  Their first child, a son they named Anderson, died prior to sailing (we don’t know if he was stillborn, or died sometime afterward).  They also lost a daughter (unnamed) just prior to sailing.  The 3rd child, a girl (unnamed) was born and died at sea, on their way to America in 1861.  I have her cause of death listed as small pox.   As it turns out, I know that they ended up sailing to Quebec, Canada, instead of New York, because their ship had small pox on it, and at that time, New York Harbor was not accepting small pox ships…they were turned away and landed in Quebec instead.  This was in the early 1860s, prior to Ellis Island being open.  They eventually did make their way to New York.  Their 4th child, also a girl (unnamed) was born either in Canada or New York, and died in New York between 1863-1864, also of small pox.  From there on to Illinois, because they knew some people who lived in Bowen.

In 1864 they had made their way to Adams County, Illinois…and their first child to live to adulthood was born:  Thomas Henry Donley.  I believe that Anderson was Henry’s mother’s maiden name.  They were determined to pass this name on to one of their children…and named three boys Anderson before one lived (our great-grandfather).

They began as farmhands, then sharecroppers, then were slowly able to buy their own tiny patches of farmland.  By the time I came along, six generations later, my grandfather and uncles owned and ran their own farms.

Those are bare facts.  I can’t comprehend them.  I understand that they happened, but not how.

We suspect their first child, the first Anderson, died from hunger or hunger-related diseases.  Their next three children, those ancestors of ours, didn’t die of starvation but they died from the famine, from the conditions they suffered as immigrants trying to flee to somewhere they could survive.

We lived through the death of our son, Isaac.  I physically can’t imagine watching five children die.  I can’t grasp giving a third baby the same name, after two you named Anderson have already died.

The Potato Famine didn’t occur simply because the crops failed.  As with every sweeping, enormous tragedy, a combination of factors contributed.

In Nicaragua, one of the Sandinistas’ strategies when they gained power was to take land away from one person or family and give it to another.  Again, such a matter-of-fact thing to say but what would it mean to experiencde that?  The knock on the door, the explanation that this land, this family home, is no longer yours.  You can take whatever you can carry.  Now.

England did the same thing to Ireland.  The campaign was called “The Plantation of Ulster.”  Irish families that had farmed their land for a thousand years were removed by violence and Scottish farmers were given the land.

When I taught government class, we talked extensively about the distinction between an action being illegal and immoral.  This is it.

Over time, many of the Ulster farm owners became wealthy enough to move to England as absentee landlords.  The Irish were “allowed” to farm their land–land that had belonged to the Irish originally–and the profits largely went to those living in a different country who had been given the land by force in the first place.

Then the famine struck.

One more thing to know: the Irish were almost wholly dependent on this food source.  When the potato blight spread and the crops were destroyed, there was no crop to switch to, no contingency plan, certainly no safety net.  These were the working poor, farmhands on someone else’s land who were allowed to keep a small portion of what they grew to feed themselves.  Then, suddenly, there was no food and the landowners evicted them.

Perhaps all you need to know about the Great Hunger in Ireland is this:  during those years when a million Irish were starving to death, England was still exporting food from Ireland to England.

The famous exchange in A Christmas Carol between Ebeneezer Scrooge and the gentlemen seeking alms for the poor comes to mind:

“Are there no prisons?”

“And the Union workhouses.” demanded Scrooge. “Are they still in operation?”

“Those who are badly off must go there.”

“Many can’t go there; and many would rather die.”

“If they would rather die,” said Scrooge, “they had better do it, and decrease the surplus population.”

Dickens wasn’t exaggerating.  Charles Edward Trevalayn, the British Secretary of the Treasury, believed the Irish were lazy and didn’t deserve help.  He believed the famine was “a mechanism for removing surplus population.”

Document evidence shows the Ulster landlords and the British government hoped for exactly this.  They wanted the Irish “tenants” off their land. Where they went to die was less of a concern. 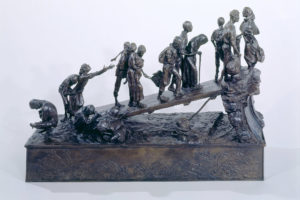 Yet if the Irish refused to move, in some instances the most effective strategy the British found was to provide passage to America.  That sounds generous, even kind, until you hear about the conditions of the ships.  When you find that the percentage of “passengers” aboard those ships who died was comparable to the fatalities on slave ships.  They died by the thousands.

The…method was for the landlord to simply pay to send pauper families overseas to British North America. Landlords would first make phony promises of money, food and clothing, then pack the half-naked people in overcrowded British sailing ships, poorly built and often unseaworthy, that became known as coffin ships.** 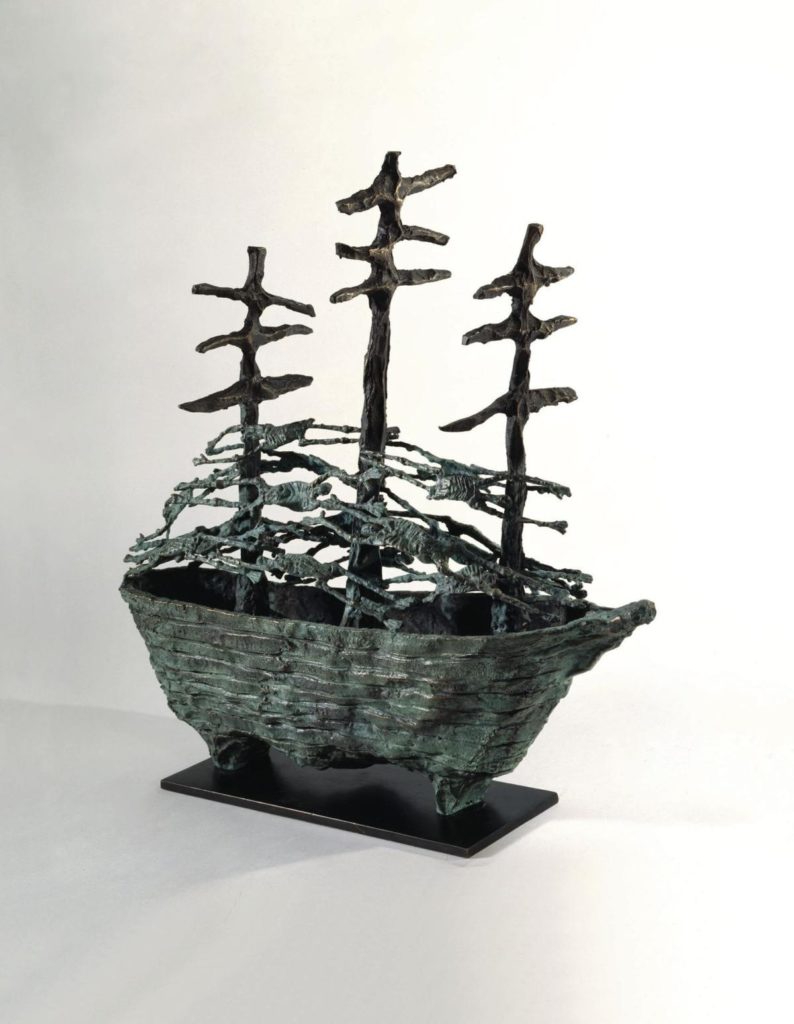 Then, when they arrived in New York, thousands more were quarantined because of the diseases they were suffering–diseases they may have contracted on the ship, in such ghastly and inhumane conditions–and left to die from typhoid and tuberculosis and pneumonia. 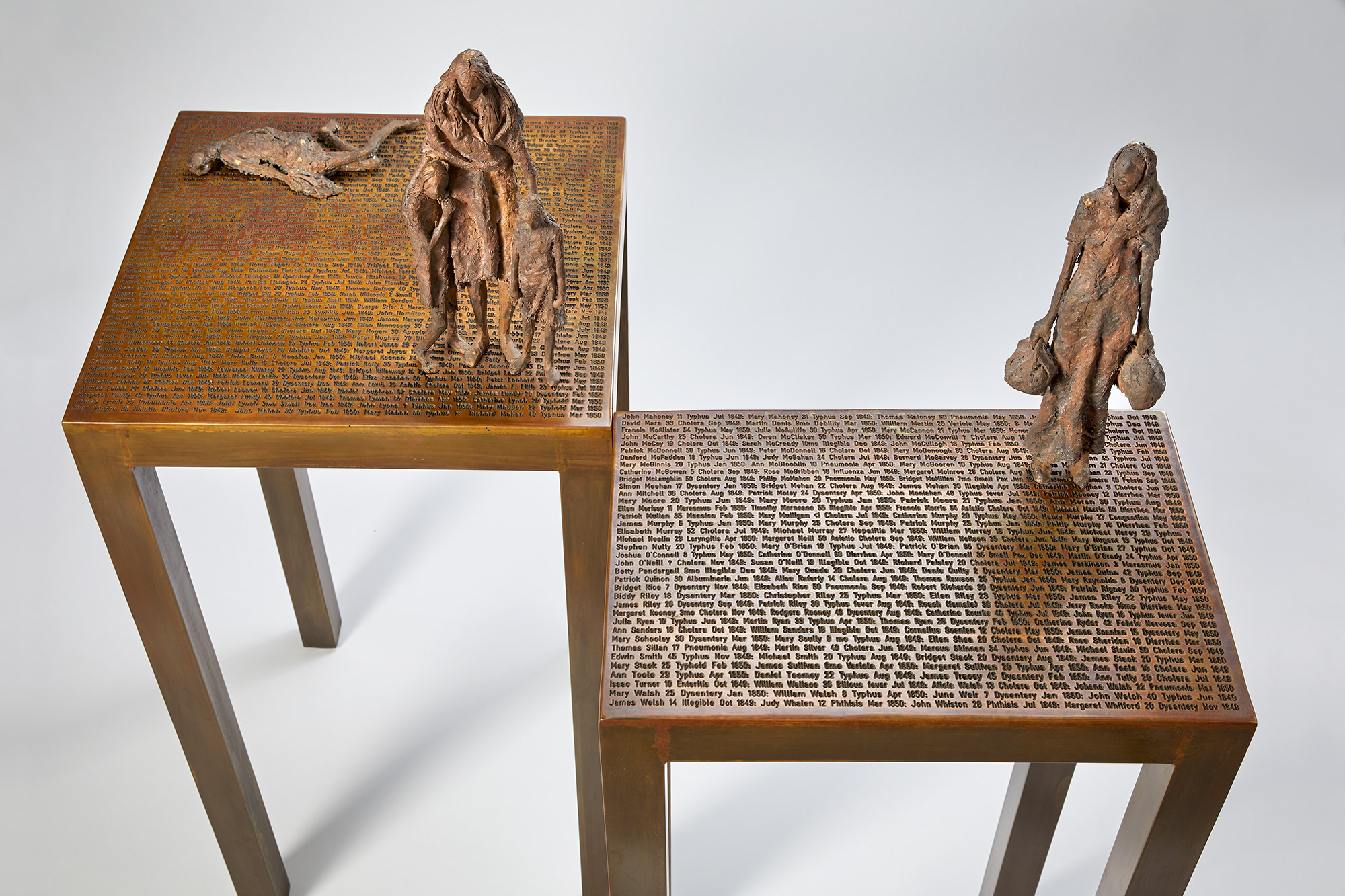 But, miraculously, some survived.

That’s how I got here.

That’s how Mom came to be born of an Irish family of farmers living in the U.S.  Immigrant ancestors of mine who were sent
to die stubbornly refused and, though they suffered the loss of all of their children, began a new family.  How is that possible?

One more thing I learned at the exhibit that I had never heard before:  when a people have suffered severe famine, it impacts them, not only emotionally and socially but genetically.  Research suggests they pass on something to their children, some imprint of having survived a great hunger. Specifically, links point to increased prevalence of mental illness.  And obesity.

Is that why I need to know?

The novel I hope to write, have wanted to write since first I heard this story of our ancestors, still feels beyond my reach.  I don’t know enough.  I still don’t understand. 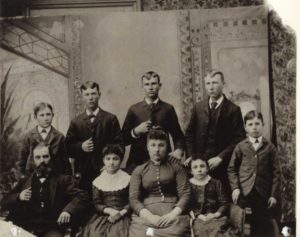 Family of Henry Donnelly, circa 1884. Anderson is the young man in the back row at the far left.

*Yes, I just made a big generalization about Nicaraguans.  Trust me on this one:  Very generous with directions, lack of accuracy notwithstanding.  Our lack of street signs does not help.

7 thoughts on “From Ireland to Here”