I don’t know, but I’ve spent all my life trying to figure it out.

Is there any room for competition in the Kingdom of God?  In a world starving for grace and love, do activities that promote one person over another, often because of innate abilities, have any place?

Let’s start with some truths:

Trying to win is trying to be first, by definition.  If I am racing, I want to get there first.  I want more points than you, or fewer strokes than you, or higher scores than you.  I want to stand on the highest step of the podium.

Winning is trying to be great by being great.  Again, this seems so obvious as to be a given, even redundant, but if greatness comes from service, from elevating others and putting them first, then winning and greatness-through-servanthood look, on the surface, antithetical.

Competition is, again by definition, a comparison.  If one team cheats or illegally brings in a ringer, we say that’s not fair, by which we mean, the match-up did not accomplish a fair comparison.  Competition in any sport that has a winner and a loser, or a winner and a bunch of losers, is the act of comparing these parties’ ability to accomplish a certain feat or display a certain skill or complete a certain task, to see which is better, faster, or more effective.  The purpose of rules and, in certain contexts, limitations on who can play, is to make for an even and just comparison.  “Yes, you ‘won’ the basketball game but we shot at the ten-foot basket and yours was eight.”  (We used to call that “ego ball,” or “dunk ball,” by the way–playing on a rim low enough to be able to dunk at will.  For those to whom God didn’t give the ability to dunk on a ten-foot rim.)  If a ref or ump calls a game poorly, meaning doesn’t follow the rules very well, but at least calls it badly in both directions, we can live with that.  But when we suspect that the official favored the other team, gave them the benefit of unfair rulings, failed to (or chose not to!) create an even comparison, well, God made tar and feathers for a reason.

You see my point, I hope, and yet comparing ourselves with others is foolish.  Sports ARE measuring ourselves by one another.  That’s why we get pissed off when the playing field isn’t even: it suggests an inaccurate measurement, scales held down in your favor.

Which brings us to the next point.  We hate to lose.  I’ll own that; I hate to lose.  I really do.  Not as much as I used to.  I’ve come a long way in this area.  I used to hate to lose at anything, at any time, in any circumstances, and it ate at me when I would lose.  I mean, it would gnaw at my liver.  What is the “it” in that sentence?

Yes, but what is that?  When I say I’ve made progress in that area, I mean that thing doesn’t rage as long or as loud as it used to.  There are even times when I can just brush it off and go merrily about my day, because this or that competition didn’t even matter.

There are even times when I can be happy for the winner and content to be the loser.  And I call that “parenthood,” the greatest of all humbling experiences.  I know people who can’t stand to lose to their children at anything and some who have never let their child win, ever.  “When he or she finally beats me, everyone will know it was earned!”  Okay.  But it may just be that you don’t want to give up winning.

Before I digress too far, let me tell you a few specifics:  I grew up being taught that the purpose of playing sports was to win.  Period.  Yes, there was some lip service paid to “how you play the game” and “the importance of participation,” but honestly, not that much.  We were there to win.  I was not taught to win at any costs, because that defaulted the fairness of the comparison.  It was important to win fairly, because then the win counted; it was important to win.

(Fortunately, the competition wasn’t to look coolest, because clearly I was losing at that.  Even my gracious wife said, “You’re better looking now.”  We think this happened in 1984 or ’85.) 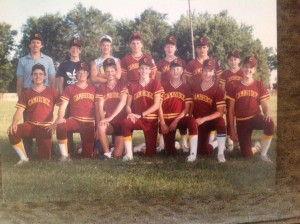 I was not a victim of this attitude, I was a gleeful participant.   It just turned out that I wasn’t a big winner.  I didn’t get a a lucky number in the universal lottery of athletic ability.  I just wanted to win, really bad.  I wanted to prove myself, I wanted to be important, I wanted to impress people, I wanted to be cheered.

I would say that most of these desires are, in truth, opposed to the Gospel.  They are an attempt to earn myself value in my own and others’ eyes.  The fact that my value would come from making a ball go through a hoop or fly over a fence (or settle in my glove and then reach first base in time) means that I wasn’t grasping God’s value for me.

Wanting to prove ourselves great by triumphing over others, wanting to be first by making someone else second, needing to compare ourselves with others to show that we come out ahead in our comparison, these are all feasting exclusively on the most delicious white rolls, filling ourselves with no nutritional content.

Please pay close attention to my wording.  The need for these things is the danger.  I would tell you the need to win and through winning prove who I was to myself and everyone else was the “it” that chewed on my entrails.

Is it bad to want to win?

It’s bad to need to win.  Needing to win can take us to very dark places.  Needing to win can quickly make the results of the competition more important than my opponent.  But as it turns out, my opponent is made in the image of God.  Often, our approach to winning can look a little too much like our approach to war: I need to dehumanize the enemy in order to be able to…  Valuing other people is more important than valuing victory.

I better repeat that, for myself and others who, I strongly suspect, know it’s for them:

Valuing other people is more important than valuing victory.

I know there are a few folks who would read that and decide, “Written by a loser.”

Going back to my history again, there was a time when the most agonizing arrangement for me in sports would be mixed-level competition.  I’m playing on a team with people of lesser ability, experience, or both, and I’m trying, I am really trying to include them,  pass to them, affirm them, value them above my need to win (which, if given priority, would require excluding them so that they don’t have the opportunity to screw up my game.  You get the tone.  It’s ugly.).  So I attempt a pass to someone, and I make sure not to throw it too hard, and–

My opponent,  a player of comparable ability who is guarding me, slams it to the ground!  On so many levels, ouch.  I look stupid.  I have just failed and damaged my team’s chance to win, I have been shown up by my competition (there’s always a game within the game, a comparison within the comparison), I have had my attempt at kindness and inclusion paid back with shame.  Sounds like I’m exaggerating?  Not the feeling.  Not even a little bit.  In fact, it should have more italics and exclamation points.  !!!

I used to get so angry in those situations.

It took me a long time, but once I grasped that intellectually, the truth started to seep into my heart.  My wife has been telling me for about five years longer than we’ve been married (or nearly thirty years) that people are more important than winning.  I don’t know how this works for professional athletes. I’ve never been blessed or cursed with that level of ability.  But once it began to sink deeper that my value wasn’t decreasing when I played to include instead of exclusively to win, some long-silenced part of my brain whispered, “Maybe my value doesn’t decrease, even when I’m utterly playing to win.”

Now we’re nearly there.  Can you play a sport, or any competition, all out and not need to win?  I’m not saying be gleeful when you lose, but take it in stride, as my father used to say.  If we need to win to be greater and first and come out on top in the the comparison, then some internal part still clings to a belief that contradicts God’s Kingdom.  Jesus reveals a God who serves and elevates others and finally gives of himself.  I can play sports all out and worship that God, but I can’t play sports to prove that I am great and valuable and better than you while worshipping that God.  That sets me up for a future segment: I think the redemption of sports, and even of competition, is that playing is worship.  Do I glorify God and experience his joy when I compete?

It was probably clear all along, wasn’t it, that when we talk about competing and comparing, we aren’t just talking about sports?

12 thoughts on “Competition, Part 1: How Important Is Winning?”