We say we want to be closer to Jesus and have a personal relationship. He says who he is and where we can find him.

I think I don’t talk about poverty and injustice so much these days for several reasons.

First, no one likes to hear from someone who sounds self-righteous. I certainly don’t.  When someone boasts about being the best, or gives any impression of bragging about superiority, I immediately question everything that person says.  To me, credibility plummets.  So now we live in an impoverished community, which is very different from where most of our (other) friends live.  I’m trying to find the balance of speaking what I know without coming off as saying, “NO ONE understands poverty like I do!”

Second, I constantly feel like I’m failing here.  That’s the truth and I’m not seeking pity or even correction for this.  I’m doing my best to be faithful where God has put us, but neither my insomnia nor my feelings of failure have budged in the time I’ve lived here.  Thus, far from feeling like I’m an expert, I second-guess myself about everything I say concerning the conditions and the people we live next to here.

Third–and this is not a good reason–people don’t seem to like to hear it.  I totally relate that we don’t enjoy reading things that make us uncomfortable, especially when there is some suggestion we should do something about it.  I have noticed that when I try to write about things for which I think I have a reasonable level of competency, those are less popular posts.  I’m never quite sure what to do with that.  I write this blog as a way to love others with the gifts I have.  I’m very pleased that the vulnerable, bleed-a-little-in-front-of-people posts resonate, that someone may benefit when I talk about my own issues with depression or doubting God.  But offering insights from my strengths is a lot less popular.  So I shrug and keep praying.

That brings us to Matthew 25.  Christians, the evangelical ones certainly, proclaim that we have a personal relationship with Jesus, that we want to know Jesus more, to be closer and more intimate with him.  If you scan the lyrics of “contemporary” evangelical worship songs, they talk about this stuff (and seeking for God to be with us in our trials) more than anything else.*

Then the king will say to those at his right hand, ‘Come, you that are blessed by my Father, inherit the kingdom prepared for you from the foundation of the world;  for I was hungry and you gave me food, I was thirsty and you gave me something to drink, I was a stranger and you welcomed me, I was naked and you gave me clothing, I was sick and you took care of me, I was in prison and you visited me.’ Then the righteous will answer him, ‘Lord, when was it that we saw you hungry and gave you food, or thirsty and gave you something to drink?  And when was it that we saw you a stranger and welcomed you, or naked and gave you clothing? And when was it that we saw you sick or in prison and visited you?’  And the king will answer them, ‘Truly I tell you, just as you did it to one of the least of these who are members of my family, you did it to me.’

If we say we want to love Jesus and Jesus says, “Here I am,” it makes sense that we would try to be there, too.  If we mean what we say.

There are other ways of encountering Jesus.  Of course we seek those, as well.  I’m talking about all the ones I can think of in this Lent series.

But nowhere else in the Gospels, which give us the direct words of Jesus, does he describe his immediate presence like this.  I experience God more in nature than in anything else; stick me on a mountaintop and I will certainly “see” God, every time.  That’s just how I’m wired.  God gave us five years of living in the mountains where I could walk out my door, turn right, and immediately be hiking up into the hills.  It was beautiful and I loved it and felt that God was giving me an extended (albeit challenging) retreat.  Then God led us to move to Nicaragua and into a poor community.**

Why would God take me out of the place where I most easily and readily experience his presence?

Well, two obvious reasons quickly come to mind:  it’s where Jesus said he is present and Jesus’ Kingdom work is about bringing justice and transformation–we needed to be closer to Jesus and have him transform us so that we could be more part of his work.  Though I struggle with feelings of failure here every day, inarguably God has transformed us through our years in Nicaragua.

Mother Teresa described this as

“Seeking the face of God in everything, everyone, all the time, and his hand in every happening; This is what it means to be contemplative in the heart of the world. Seeing and adoring the presence of Jesus, especially in the lowly appearance of bread, and in the distressing disguise of the poor.”

Jesus is present in the distressing disguise of the poor.  He says so.  One of the worst dangers of Christianity, and one we all fall prey to and from which we must repent, is picking and choosing which of God’s truths we like and follow and which we’d prefer to ignore or explain away.  There are some passages we’d prefer to use our lowlighters on, just dim them right down so we don’t have to deal with the discomfort, the distress they cause us.

“Why do you call me ‘Lord, Lord,’ and do not do what I tell you?  I will show you what someone is like who comes to me, hears my words, and acts on them.  That one is like a man building a house, who dug deeply and laid the foundation on rock; when a flood arose, the river burst against that house but could not shake it, because it had been well built.  But the one who hears and does not act is like a man who built a house on the ground without a foundation. When the river burst against it, immediately it fell, and great was the ruin of that house.”

But following Jesus means following what he says, especially what he says to do.  Yep, this is the grace blog telling you that.  Grace is meaningless if we just do whatever we feel like and expect God to bless it.  That isn’t grace.  Grace is that, by God’s love and kindness, he forgives us and makes it possible for us to live our lives to the fullest.  God’s grace means that, instead of leaving us to destroy ourselves, God makes us partners in this work of restoration and redemption that we call his Kingdom.  We get to be part of lives becoming whole and so full of God’s love that they become contagious–beginning with our own.

I am friends with people here who I would never have known if we had stayed on our mountain in Washington.  God has changed us through these relationships, through our encounters with him here, exactly where he said we would find him.  As I write this, there is a little girl with a cough and a runny nose who is resting on our couch on our back patio.  She loves me, in the way that sometimes almost-two-year-olds just decide they love you, whether you deserve it or not.  She starts calling my name almost every time she sees me and sometimes when she doesn’t see me.  Today she is feeling awful and has been screaming a lot because she’s miserable…and almost two. 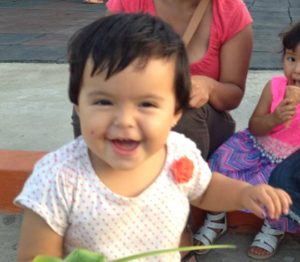 This isn’t some moment of lighting-flash revelation, some epiphany.  If she feels much sicker, we might give her mother and her a ride to the clinic.  Because we have some partnership-friendship-neighbor-family relationship with them, we look out for each other.  I don’t mean we just provide for them or pay for things; it doesn’t work like that.  They watch out for us as much as we watch out for them.  I can’t fully explain how it works, but it does work.  I can’t explain how Jesus is present in refugees and prisoners and this little girl, but he says he is.  I call him, “Lord, Lord.”

By his grace, I’m doing what he tells me.

As I said in yesterday’s post, guilt bears rotten fruit.  Conviction, in which God helps us to see what needs to change and gives us the power to make those changes, that brings life and joy and freedom.  I have no idea how you are responding to Jesus in this area and I’m certainly not judging or serving as travel agent to send you on guilt trips.

Where do you find Jesus in his distressing disguise?  Where is he asking you to join him?  Where does he want to be with you?

*I’d be curious if anyone else sees this differently.

**That, of course, is a longer story.

6 thoughts on “Matthew 25 and loving Jesus”