Picture your most challenging day at the DMV, the day you were most tempted to express profanity in public.

Now picture the hottest classroom in which you’ve ever sat, wondering why this school can’t have air conditioning.

Add that the people sitting behind the glass get to decide whether you stay in the country or not.

Yesterday, my children had an appointment to renew their cedulas.  Cedulas are the Nicaraguan version of U.S. Green Cards, the identification card that means you have legal residency in the country.

Many of us in the U.S. have experienced a moment at the Department of Motorized Vehicles that felt like a Catch-22.  Or we’ve just sat for what felt like an insane amount of time for the simplest request.  Gringos are not good at waiting.  We’re not trained for it and we’ve been inculcated with sayings like “Time is money,” so that sitting and doing nothing for extended periods of time for no evident reason hurts us. Irritates us.  May even infuriate us.

If you can’t endure sitting and waiting for no obvious reason, I’m going to recommend not moving to Nicaragua.  Sometimes, that is just life here.

La  Dirección General de Migración y Extranjería is such a place and yesterday was such a time.  In fact, every visit I’ve ever had to Migración, as we fondly refer to it, has been such a time.

Now let me say here that I am an advantaged gringo.  Our school, Nicaragua Christian Academy, International, walks us through the process of getting our cedulas, keeping them renewed, etc.  NCAI employs one person, Jairo, whose job is largely to keep the working gringos legal and squared up here, and God bless him.  I’ve talked with friends who were visiting  Migración without the benefit of such expertise who looked like they might blow all their fuses.  The section for nationals always looks even busier.

One of the biggest challenges with remaining a legal resident here is that the rules keep changing.  Maybe they’re always changing.  Last year, we were unable to obtain appointments to renew our cedulas–including that we had several appointments scheduled which were then cancelled–and I had to travel to Costa Rica twice with an expired cedula.  I was warned that an official at the frontera might confiscate it.  Would that make getting it renewed even more difficult? It was expired anyway, I was told, and I’m already in the system, but no one knows for sure and I would be walking around without any form of legal ID to be in the country.* Though I got raised eyebrows and warnings, especially at the airport, no one took my cedula.

The kiddos’ appointment yesterday was to get theirs renewed from when they expired last January.  Understand, this is with our friend Jairo, who knows the system, doing everything in his power to get them renewed. For about six months, none of the teachers had been able to get renewals and we were starting to worry that the government had decided to stop granting them. We’ve seen other signs that the government is getting stricter with foreign workers. Again, the rules change, usually unwritten, and then you try to adapt.

That’s all big picture.  Small picture, we came in, took our seats, and waited.  The girls do pretty well with their books–one even took a nap–but it’s a long stretch for my 10-year-old.  There are vendors inside, ice cream and “American Doughnuts,” among others, and then rows of little food tables and stands outside.  We have a “you get one thing” rule for Migración days and we try to bring snacks and plenty of water.  Did I mention it’s hot?**

Mostly, it’s just enduring the wait–time may be money, but if you lost your flexibility and humor, you’ll also lose your mind.  After about three hours, I went out for a walk.  Though being inside  Migración feels different than any office I’ve experienced in the States (the bathrooms are notably rougher), the walk outside really drove home that I wasn’t in Kansas anymore.  Imagine very busy sidewalks, bustling with people going in both directions and dozens of food stands selling fruit, baby formula–I mean towers of formula cans–pop, snacks both packaged and being fried, signs for fotocopias scattered throughout, and then at least half a dozen little stands looking no different than the others except they had signs advertising “Abogados y Notarios.”  I bought six buñuelos (fried yuca balls), but I could also have 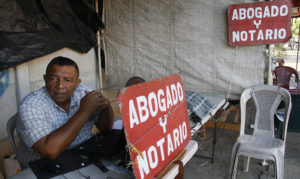 stopped and gotten a consultation with a lawyer.

Of course, this felt discordant to me, because we have different images of lawyers in the U.S. (“different” doesn’t always mean “better”), but it also speaks volumes about the situation: Nicaraguans trying to find their way through the red tape labyrinth.

We succeeded yesterday.  It took about four hours of waiting (we left school about 12:30 and got home a little before 6) but the bar is very low for a successful visit–if we leave with our ID’s, we win!–and we’ve waited longer than that without success.  The action of the appointment was this: we waited two hours, the kids got their pictures taken, we waited two more hours, we received and signed for the new cards.  And truly, we’re grateful to be received here, to follow God’s calling in a place that has no obligation to host us but has allowed us to call this home.

Oh, and they each had a doughnut.  I just had the buñuelos. 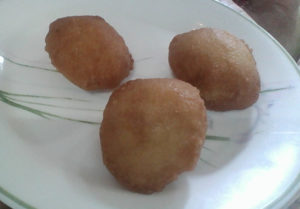 PS I hope the tone has come across that, though this is a challenge of patience, as long as we’re allowed to stay and continue our work in Nicaragua, it isn’t a serious problem.  In contrast, the crises over legal, long-term residents in the US being deported are very serious problems.

*Yeah, I could carry my passport, but it doesn’t give me the rights a cedula does.  Frequently, when making any transaction–banking, purchasing, getting insurance–the first question is “may I see your cedula?”

**To be fair, I don’t think it’s as hot as the police building where I had to pay my ticket.  That was more uncomfortable, but this has more at stake.