“Do you really mean that Strider is one of the people of the old Kings?”  said Frodo in wonder.  “I thought they had all vanished from the world.  I thought he was only a Ranger.”

“Only a Ranger?”  Gandalf exclaimed.  “My dear Frodo, that is just what the Rangers are: the last remnant in the North of the the great people, the Men of the West.  They have helped me before, and I shall need their help in days to come; for we have reached Rivendell, but the Ring is not yet at rest.” 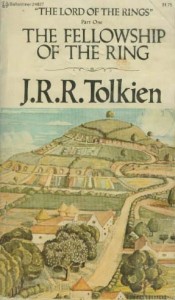 My beloved edition of the Lord of the Rings (though my copy is in much worse shape).

Frodo sees Strider.  He identifies him accurately.  But he gets the “my dear Frodo” from Gandalf because The Shire formed Frodo’s idea of who and what a Ranger is.  Frodo sees but doesn’t understand.  He’s limited by his own narrow perspective.

I think Tolkien was a genius for a whole host of reasons.  Here’s one:  in his very next line, Frodo declares that his month’s adventure has been enough for him.  He’s tired and ready to go back home.

If you’ve read the books, or seen the movies, or even noticed that there were three movies and two of them came after the Fellowship of the Ring, you’ve got a pretty good idea that Frodo doesn’t get his wish…for a long, miserable time.  But this endurance and misery will change Frodo, and give him an utterly different grasp on the world he travels.  He experiences the darkness of Middle Earth from the inside, as almost no one else does–and even fewer live to describe it.  He sees Aragorn crowned King, at long last.

On the throne sat a mail-clad man, a great sword was laid across his knees, but he wore no helm. As they drew near he rose. And then they knew him, changed as he was, so high and glad of face, kingly, lord of Men, dark-haired with eyes of grey.

Of course, by the time Frodo sees Strider–who has truly and fully become Aragorn–in all Aragorn’s glory, Aragorn kneels to Frodo and Samwise.  Frodo’s change of perspective came as one aspect of his transformation.

Okay, if you love Lord of the Rings, you’re probably fine with my waxing eloquent (or less than eloquent) over my favorite novels of all time.  But in case you don’t and aren’t,* the quote leapt into my mind with several thought attached. 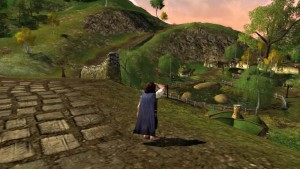 Frodo won’t change his understanding of Strider until 1)He steps outside of his smaller, comfortable, insulated world and talks to him.  Strider’s nickname is “Longshanks,” which, like “Strider,” conveys that he walks great distances and may even be a bit pejorative.  He looks ragged and dirty.  Frodo suspects him to be a cutthroat and Sam is ready to fight him…the first time Strider saves their lives.  While Frodo dwells in The Shire, his view of Rangers in general will never change and he will never encounter Strider or any other actual Ranger.  The first step toward Frodo’s changed perspective came through direct encounter.  His guesses were wrong and his assumptions were wrong.  Just seeing Strider wasn’t enough.

2)Frodo changes his mind about Strider’s intentions.  He has to see for himself that Strider is trustworthy and means to protect the hobbits, not harm them.  Gandalf anticipates that Frodo will distrust Strider (and Frodo is supposed to be cautious!) and so writes a letter to vouch for Strider.  Between Strider’s actions and Gandalf’s words, Frodo accepts that he judged wrongly.

3)Frodo still needs the paradigm shift that Gandalf provides above.  Frodo knows Strider saved his life; he still needs his definitions corrected.  In this moment, Frodo is making the adjuistment that Strider is an exceptional Ranger.  Frodo’s category hasn’t changed, but he can believe that maybe not all Rangers “are like that.”  And thus he needs to hear, “my dear Frodo!”

4)The rest of Frodo’s change comes through his friendship–and partnership–with Strider.  They go on a quest together (though not for as long as they’d hoped–oh dang, spoiler alert!).  They come to rely on each other.  Strider saves Frodo’s life…a bunch of times.  Frodo takes on the task that Strider believed had to be his own, and let’s say effectively saves Strider’s life and a few others in return.  Mostly intentionally.  By the end, Frodo knows what a Ranger is, who Strider/Aragorn is, and how the pieces fit together better than almost any other being in Middle Earth.  He also knows himself infinitely better than he did when he began.

So, beyond a very overdue book report for sophomore English, what am I saying here?  When I traveled to South Africa, before the fall of apartheid, Caesar Molebotsi, a leader of the movement for non-violent change there, told us that one of the very first steps in their work was the radical idea of having blacks and whites eat dinner together.  Not attempting political dialogue, nor asking for either side to make concessions, just breaking bread, sharing food, face to face.

If I limit my world to the view of people who have seen only what I have seen, who share all my opinions and beliefs, then I am always confirmed in my understanding–whether I am right or wrong.  If I have a picture in my head of what “they” are like, but I don’t know any of them personally, then I need to ask what formed that picture.  I recently saw a photo of “Syrian refugees” who were unbelievably ripped and bulked out, and many of the comments said how much they looked like soldiers and potential terrorists…except they turned out to be Australians who had been caught with a huge load of steroids. Huh.  It’s almost a cliché now to mention that “the opinions given on the internet do not necessarily reflect the opinions of Reality”…except that so many of us are still forming our views through them. I confess I do mean “us,” as I’ve had friends call me on posting memes that give too narrow or one-sided a view of complex problems.  (By the way, that’s a different correction than, “You’re wrong and you’re an idiot!“)

Getting outside my comfort zone.  Stepping out of my circle, or even expanding my circle to include people unlike me.  Getting to know people who don’t look like me, act like me, speak like me, or believe like me.   People who come from other countries have seen a different world than the one i know.  I’ve learned in Nicaragua, and not always easily, that I assume my ways and my country’s ways are right–because their mine.  Ours.  But everything, everything I assume is formed by my own version of The Shire.  Including–if I’m willing to admit it–my faith.  That doesn’t mean my faith is wrong, but it’s a safe bet I’ve got some assumptions about Rangers….and other things.

Final thought:  moving outside my comfort zone and truly seeing people who have known a different world may do more than help me to be fair-minded and take a broader view of things.  It may lead me to partnerships and quests of which I’d never dreamed.  The best friends in your life may be people utterly unlike yourself.  Yeah, it might be a lot rougher than I had in mind, outside my cozy hobbit hole.

“In a hole in the ground there lived a hobbit. Not a nasty, dirty, wet hole, filled with the ends of worms and an oozy smell, nor yet a dry, bare, sandy hole with nothing in it to sit down on or to eat: it was a hobbit-hole, and that means comfort.”

But that was Tolkien’s point: the most comfort-loving creatures found it within themselves to step outside and become more.  Become bigger.  To have all their assumptions challenged (“doesn’t everyone know about Elevensees and eat six meals a day?) and their views changed.

To have the courage to live in the wide world. 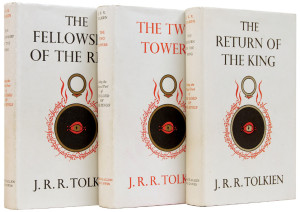 First edition Lord of the Rings, in case you were stumped for my Christmas present. peterharrington.co.uk/blog/identifying-collecting-tolkien-first-editions/