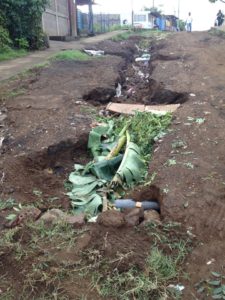 Same road, not long ago.

We have a new road!

Yesterday, the government-employed road crew poured the concrete and edged and smoothed and transformed our rutted, mud-rock-sand bag-and-garbage street into a beautiful, flat, solid surface that one could, if one chose, drive a car on.

The neighborhood is elated.  Declarations of “Gracias a Dios” resound in every exchange.  We have a different living situation than the one we awoke to just twenty-four hours ago.

Neighbors try to make sense of it.  Who pulled strings that this wonder happened?  Who in our neighborhood would have those strings to pull?  It’s not even an election year, that this was intended to score political points with voters.

Maybe it just happened.  Maybe we just reached the top of the schedule.  Maybe a neighbor’s comment after they came and dug up the road, took photos, and left it over two years ago was prescient:

“When will they come back?” we asked.

“When they remember us,” she said.

Prospective residents will drive onto this lovely, level road and seriously consider living here.  Our road is now a “pro” instead of a “con.” 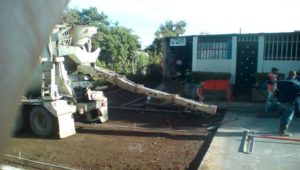 I doubt you are reading this and thinking, “So it’s a new road?  What’s the big deal?”  Obviously, it’s a very big deal.  But take this into account, for contrast.

While I was in the States but after Kim had returned, in that two-week window, a crew came through and redid the main water pipe, which meant digging up the street to get to that pipe.  They then left it…without connecting it to anyone’s home.

A day, two days, three days without water and people started to figure out what happened.  Then, one by one, our neighbors figured out where to dig, including breaking through the cement sidewalks (I’ve always been amazed that we had cement sidewalks next to our dirt-ravine road), to hook up their own water.

Of all the things that I’ve seen and heard about that have just been left for people to take care of themselves, that one astounded me the most.  “Here’s a new water pipe; now figure out how to get water to your home.”  And they had just put in new water meters for the entire block!

Did it just slip their minds to connect a single home to water?  Once the neighbors figured out what had happened–or not happened–there was brief talk that the crews might come back to make those connections.  But no, they had dug up the road to lay the pipe and then buried it again.  Our friends realized weren’t coming back.  And they didn’t.

I will confess, I doubted.  The road crew started about three blocks above our house and worked their way toward us.  When they completed the section above our house, we watched the steam roller get loaded up on the massive vehicle-hauler and taken away, and my stomach clenched.  They’re going to stop right there.

They didn’t.  And that may reveal a pessimism that has crept into us.  We have begun to assume things won’t work here, or will be inexplicably complicated.

But that makes me even more grateful that this road happened, that this project is carrying right on by our home and as I sit here describing it, I can hear the sounds of the next section being prepared.

My favorite part of this, by far, was walking out yesterday to discover our neighbor Juan Carlos “borrowing” the excess cement to fix the holes in our sidewalk.  I quickly grabbed my shovel and joined in.  I’m trying to picture this same situation in the States, weaving in and out of a road crew, grabbing their left-over materials to fix the parts they aren’t going to touch.  We filled up four or five large holes–did I mention that the sidewalk had been broken through to connect water pipes?

At one point, I could hear a group of the workers debating, shouting at each other that they needed water.  I asked if they meant for drinking or for work?  For work.  So I took the empty 1-liter Pepsi bottle they handed me and filled it up for them, so their project could continue.  Later, Kim brought out coffee and water for all the workers.  I think today we are going to help, along with Mileydi’s church, to provide their lunch.

It’s easy, where we live, to complain when things go wrong, because they do go wrong, not infrequently.  I’ve always told my children that they should rejoice in the good things at least as loudly and energetically as they gripe about  the things they don’t like.

HOORAY!  WE HAVE A NEW ROAD! 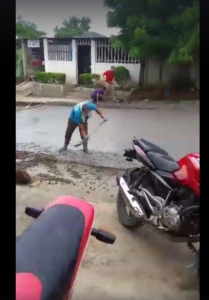 I’m the gringo in red.