Fruit is a big part of my life.  I probably eat more fruit than anything else–yes, including chocolate–and smoothies (batidos) typically provide my first, or sometimes first two, meals.  I started doing it after I noticed that on the mornings we had smoothies for breakfast I felt better.  That was probably three years ago.  Plus, I use mostly frozen fruit in a place where cold=good.

We come from central Washington State.  If you live there, you know what that means, fruit-wise.  If you don’t, I feel a little  sorry for you. This is the sign you see as you enter Wenatchee: 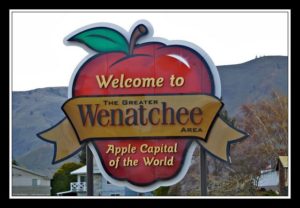 Living somewhere that grows cherries, pears, blueberries, apricots, peaches, nectarines, and apples in abundance, I had assumed that fruit would be a downgrade moving here.

But I eat more fruit now than I did in the Northwest.  Certainly I miss cherries, but fresh bananas ruin you for bananas that have traveled halfway across the planet on a cargo ship.  I thought I didn’t like mangoes because of that weird aftertaste…and then I had a mango cut directly off a tree–picture a 20-foot metal pole with a curved blade like a grapefruit knife on the end–plop! in my  hand, and I discovered that 1)I actually love mangoes, 2)that aftertaste isn’t from the mango.   But I don’t love them compared with Kim, who fiercely, passionately devours them.  Left to her own devices, she can eat five or six in a day.

That leads to the major contrast:  we get fresh fruit here, different than Pacific Northwest fresh fruit, but fruit here is insanely cheap.  Correction:  locally-grown produce here is insanely cheap.  You can also buy a single apple here for between a dollar and three dollars, and there’s about a 70% chance it will be mediocre or worse.  Soft, not crunchy, mealy, bland.  Without too much effort, we can find apples here grown within 30 miles of our home in Wenatchee, but they will be the worse for wear, and pricey.

In contrast, a typical fruit purchase from a fruit stand a short walk from our house would include some or all of these:  2 pitaya, 4 mangos, 1 sandia (watermelon), 2 piña, 24 bananos, 1 papaya (though they’re huge, so that might be only once every third or fourth time) and then 2 pepinos (cucumber), 2-4 zanahoria (carrots), a small bag of tomates, and perhaps cebolla (onion) or chiltoma (a mild pepper).  That would all cost $5-$6, maybe $7 if we got everything and the sandia was extra large.  Local bananas cost about 4 cents a piece.

Oh, we’d also get a fresh bunch of hierba buena, i.e. mint.  Add that cost: 7 to 9 cents.  Seriously, fresh hierba buena, which smells like heaven will (that or essence of almond and vanilla are my bets) and makes a good smoothie incredible, may be my favorite thing to purchase here.  A bunch will last only three days before it wilts, so I’m into that for like 15 or 20 cents a week. 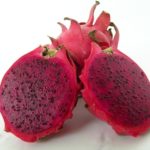 Pitaya, which you might find as dragonfruit in the U.S., may be our greatest discovery here.  You cut off the bright skin to get to the shocking magenta fruit.  I don’t have an apt comparison for what it tastes like.  Bright.  It tastes bright.  Our youngest daughter loves pitaya–violently–and has mastered the pitaya-calala smoothie.

Calala is sour, but complex sour, not just lemon sour.  It’s delicious.  It has a pale yellow, very thick skin that takes some sawing through, and on the inside the fruit is almost gelatinous, a texture like tapioca pearls and slightly crunchy, edible seeds. 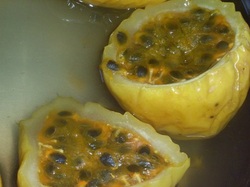 Calala is “passion fruit” in the U.S., though I don’t remember ever trying it before we moved here, certainly not fresh.

I could wax ecstatic about tropical fruit longer, but the other and perhaps more significant aspect of this is buying local.

We don’t buy locally-grown fruit exclusively, but we try.*  If you believe in far-fetched theories like…air pollution, that’s a good idea.  No matter how low-emission your vehicle, even if you walk and bike exclusively, you can do more to reduce air pollution by buying local.  Breathing is not overrated.

I’ve said this repeatedly and I’ll continue, because it’s so hard to grasp:  unemployment in Nicaragua is 50-70%.  More than half the adults who live here don’t have steady jobs because there aren’t enough steady jobs.  My friends get up at 3 and go to Mercado Israel or Mercado Oriental at 4 to buy their fruit wholesale so they can sell it this cheap to their neighbors and the gringos and still make enough to live on, or at least contribute to their income.  Buying local helps in every community; here, it makes a huge difference.  A dollar recirculates 8 to 20 times in the barrio–and most of our neighbors have limited mobility and shop online a lot less than we do, which is a lot less than we did in the States. How much more important is the “local multiplier” effect in a poor community?

The other part that weighs in favor of Nicaragua Fruit Life  (NFL?) is the harvesting season.  I remember in my first year here asking what the season is for different fruits.  I received confused looks.  I tried again, two or three different ways.  Finally, I grasped the disconnect–fruit grows here all year long.  Mangoes “only” grow from January through July or so.  Kim suffers from this short season. Cherries in the Northwest are fresh for a month, maybe while pitaya, calala, sandia, and piña are picked yesterday and eaten today twelve months of the year.

Our neighbor across the street owns a motorcycle repair business that we were able to help him get started.  But we don’t own a motorcycle so we can’t frequent his business.  We go to the seamstress up the street every time we need an alteration or to have something stitched, but even our 10-year-old doesn’t tear his clothing that often.  On the other hand, we’re always buying groceries.  Thus, fruit becomes the way we most frequently contribute to our local economy.

Oh, I forgot to mention limones!  And aguacates, which Kim may love as much as she loves mangoes !  And don’t get me started on coconuts and coconut oil…

*I have a weakness for frozen blueberries.