I haven’t written a blog post in January.  There are a number of reasons: numerous commitments, sick wife and son, waning motivation, prioritizing writing time, discouragement.

But I read a quote and feel compelled to respond.  Simply put, it epitomizes “Grace is Greater.”  I have to write about it.

“Should you ever reach the point of truly facing what you have done, the guilt will be crushing. And that is what makes the gospel of Christ so sweet. Because it extends grace and hope and mercy where none should be found. And it will be there for you. I pray you experience the soul crushing weight of guilt so you may someday experience true repentance and true forgiveness from God, which you need far more than forgiveness from me — though I extend that to you as well.”

I do want to thank you, first, Judge Aquilina, for giving all of us the chance to reclaim our voices. Our voices were taken from us for so long, and I’m grateful beyond what I can express that you have given us the chance to restore them.

Nassar was sentenced to between 40 and 175 years for decades of sexual abuse against one hundred fifty-six girls.  He also was found guilty and sentenced to 60 years for federal child pornography charges. He will die in prison.
The depth of Nassar’s atrocities, his sheer, depraved sinfulness (I’m guessing even secular folks may be comfortable with that description in this case) is difficult to fathom.  You and I might argue that he is beyond forgiveness.
But Rachael Denhollander has forgiven him.
I take her at her word.  She offers the man whom I would be sorely tempted to describe as a monster and an abomination her forgiveness and exhorts him–prays for him to receive, to experience, true repentance and then true forgiveness from God.
I have spent years (and years) forgiving some people in my life whose sins against me, by my own measure, are a trifle compared to what Ms. Denhollander suffered.  I try to grasp her process of saying with sincerity that she forgives her abuser and I fail.
But I believe her.

And that is what makes the gospel of Christ so sweet. Because it extends grace and hope and mercy where none should be found. And it will be there for you.

Reflect on these words for a moment.  Then consider to what “that” refers in her sentence:

“Should you ever reach the point of truly facing what you have done, the guilt will be crushing. And that is what makes the gospel of Christ so sweet.

The crushing guilt is what makes the Gospel of Christ so sweet.  The Gospel of Christ “extends grace and hope and mercy where none should be found.”  To the extent that Larry Nassar is a monster, precisely to that extent God offers him grace.  Ms. Denhollander forgives/has forgiven Nassar and so will God, if Nassar truly repents.
Does that offend you?  Because I am offended.  I believe in grace and know that God’s grace has saved my life and yet I’m offended.  But it’s good for me to be offended. It displays for me my own hypocrisy, and yet proves my blog’s thesis statement: to whatever degree we grasp God’s grace, it is greater. than. that.
The power of the Gospel is that there is no one living who is beyond God’s grace.  No one.  God will forgive anyone who repents for anything, for everything they have done.  Me, Larry Nassar, you.  All of us.
Understand that no one is excusing Larry Nassar’s crimes, least of all Rachael Denhollander.  Her courage, determination, and persistance put him in prison, not single-handedly but as the single biggest contributor to bringing about justice for his abusive violence.  To excuse means to wave off, to look the other way or ignore, to accept an excuse as covering the sin.  Hardly.  Sin has consequences, and sins that harm others have greater consequences.   A sentence of two hundred years in prison is the opposite of “excusing.”
Grace looks directly at the crime, the sin, the atrocity.  It recognizes the crushing, appropriate guilt.  Then, while allowing consequences, it offers forgiveness and the opportunity for redemption.  None of this has anything to do with deserving or earning forgiveness: grace means precisely that you do not and cannot earn forgiveness.  Grace is giving something good when something bad is is deserved, giving love and forgiveness and love when condemnation and death are deserved.
Grace is more powerful than revenge.  Forgiveness frees the victim. It frees the victim from being a victim anymore, sets the abused one free from the power of the sin*, and, astoundingly, opens up the possibility of redemption for the sinner, for the violator, in a way that revenge never can.  We have historical examples.  Saul of Tarsus.  He hunted down followers of “The Way,” the radical heretic Jesus, and dragged them from their homes in chains, seeking their death sentence.  “Breathing violence and threats.”  Then Jesus redeemed his life.
.
Confrontation, repentance, forgiveness, transformation.  Grace.
Paul understood the crushing guilt.  When he describes himself as the worst of all sinners (“the chief of sinners”), I don’t think he’s speaking lightly or being falsely self-deprecating.  I think he’s remembering accosting mothers and fathers in their homes, remembering the eyes of their children watching him make their parents disappear, turning their children into orphans, for the crime of responding to a teacher who taught love and forgiveness.
But that was ancient history and we elevate “The Apostle Paul” to saint status, forgetting who he was, what he was.
Today, Rachael Denhollander offers Larry Nassar forgiveness.  She points the way to his redemption, because God can redeem even his life. 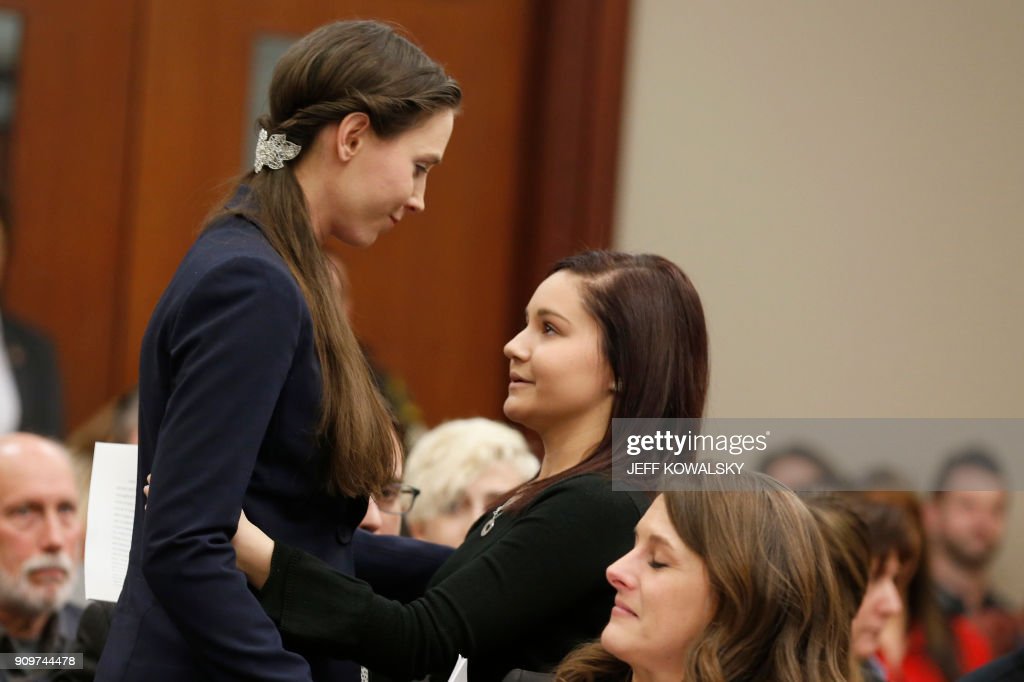 #MeToo and #ChurchToo call out sinners for their sins, abusers for their crimes.  The women and men who have suffered abuse deserve a voice, they deserve to see justice for their abusers.  Then they must decide if they can forgive.  I’m not standing in their shoes.  I’m not claiming that I would.
I’m saying that Rachael Denhollander did.  She reminds me, I hope she reminds us all, of the breathtaking, shocking power of grace.  She’s my new hero.  Plus Jesus is my hero, for giving her the love and the strength to do this.  I’m pretty sure she’s fond of him, too.
*I don’t say this lightly and forgiveness for in some situations may be a lifelong process.

7 thoughts on “Rachael Denhollander, Costly Grace, and the possibilty of Redemption – Part 1”