Too much hard stuff is going on.  A lot of people are upset.  People are arguing and fighting.  Reading social media no longer feels like a nice break or a way to connect with my far-away friends (or heckle my students).  I need to know what’s going on and at the same time, I’m responsible to keep my little boat afloat.

My 9-year-old boy has lately taken up playing catch with a baseball and playing marbles.  We don’t have much space outside our house, so we’re playing catch about six feet apart.  One of these days, when he’s a little more confident, we’ll step outside our gate and play out on the “street,” where we’ve seen full-blown baseball games since we moved into this neighborhood.

Last week, he went to the mercado and Kim bought him a bag of marbles.   They’re all clear with those little stripes through them, all the same size but one “shooter,” and the little bag came with instructions for different games of marbles.  Corin loves making up games and creating new rules for existing games.  He’s very creative:  he’s also constantly inventing things and loves to make origami Star Wars characters.  Of course, sometimes the new rules inordinately help his cause in a game, but a guy’s gotta try, right?

There is an elderly man who lives in a house on a corner that I pass whenever I walk to school.  I jokingly call him my “lonely man there on the corner” (get the reference?) but he’s actually one of the bright spots of my days.  We call each other “Senor” and always call out a kind greeting to each other, unless he is sitting there napping in the sun.  He uses two canes to walk, the kind that have metal braces for his forearms, but I will see him propped up on those canes with a broom, sweeping the sidewalk in front of his house, or even with a shovel, trying to fill in some of the potholes on his corner.

My children all have really good friends, the kind of friends we parents pray for.  None of them are experiencing bullying (three of them have in their lives) and, as well as I can tell, they all stick up for kids/people who are picked on.

My friend Juan Ramon, who worked for us for several years and is one of my absolute favorite people, finally got a job as a pastor!  It’s not well-paying–I’d call it the opposite–and it will be a serious challenge, a tiny, poor church in a very rough barrio.  But he has felt called to pastoral ministry for many years and my hope as we have employed him and done what we can to support his family has always been to see this happen.  Remember, unemployment in Nicaragua is 50% and simply supporting one’s family can be difficult or nearly impossible.  I call this one of the biggest answers to prayer I’ve seen since we moved here!

This year, a guy who graduated last June has been an assistant soccer and basketball coach.  He is an amazingly great young man–when he was a player, I spoke so highly of him one of the other coaches joked that I was his agent.  But due to financial aid issues–and, in my humble opinion, getting jerked around by the college he hoped to attend–he had not been able to start school, though he was qualified and accepted.  One of the other teachers here came up with a brilliant idea–he asked the guy to be his teaching assistant and is paying him by covering an online course so that the guy can get started on his college coursework.  What an empowering idea!  Not charity, but a chance to get some classroom experience and make progress on his education instead of feeling stuck!  Beautiful.

Every day, I see young people taking risks to grow and become better people, to face the pain and craziness in their lives, to figure out how to love in a world full of hatred.  And some of them aren’t very good at it yet.  But they’re growing.

Finally, deep inside, I’m feeling a shifting.  I don’t know how big it is yet.  It may just be that my work on forgiving* some people is starting to seep through, which is in itself a big deal.  It may be tectonic plates doing some major movement.  Maybe I’ll have some new continental configurations soon and won’t recognize myself.  I would describe a significant portion of my time in Nicaragua as, to a lesser or greater extent, just surviving spiritually.  Even though I’m still wrestling with some of the same issues–perhaps I always will–I’m also having a breakthrough of some sort.  I really don’t think it’s just the chocolate…because I haven’t eaten any chocolate (yet) today.  At forty-eight, a breakthrough is exciting.  If I can figure out what it is, I’m sure I’ll write about it.  That’s one part of the breakthrough, actually.

I know I’m privileged, because the bad things happening have not directly hurt or ruined my life.  I’m not trying to stick my head in the sand or wear rose-colored glasses.  Many things are horrible right now and we need to respond as faithfully and courageously as we can.  What I’ve shared doesn’t change that…but they matter.  They are patches of sunlight in my world.  Part of our response needs to be encouraging one another and spreading hope.

Though a decent number of people read my blog, I don’t get many comments, but I’m asking for this one:  What sunlight can you see in your life right now? 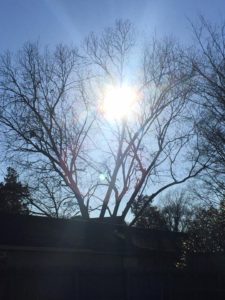 P.S.  I’ve been happier this week since I stopped, almost completely, reading the  “comments” on Facebook.

*If you don’t think of forgiveness as work, either your heart is a whole lot bigger and better than mine, or…you have more work to do.