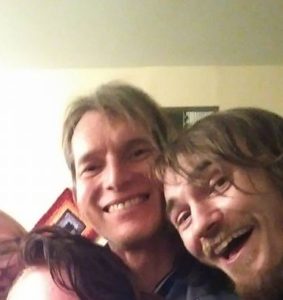 Me with Tad celebrating his birthday

My friend Tad turned twenty-nine today.  It astounds us, Tad’s friends, that Tad is still alive to celebrate twenty-nine years.  Tad is one of my favorite redemption stories.

I’m not going to tell Tad’s story in detail, because I don’t have his permission (though if I asked, I’m certain he’d say, “Sure! What the *bleep*!”).  I’m not going to tell you about riding a longboard fifty miles an hour without a helmet or crashing a motorcycle in the middle of Western Nowhere (or did it break down that time?).  I hope he writes his own story someday.  He’s a gifted writer, and you’ve never heard a story like his.  I promise.

I am going to tell a couple of the things I love most about my friend Tad.  For context, I started mentoring Tad about 10 years ago, plus or minus.  Tad was abused as a child, Tad was kicked out of his home as a teenager, and our time together in earnest began on a phone call:  “Hey, I need to come live at your place soon.  The place where I’m staying, they’re throwing pots and pans at each other.”

Not sure if you’ve been in a pots and pans fight.  I grew up with some serious complications in my home, but I never have.

The ministry I was doing at that time involved having a group of young adults come live on the fifteen acres we had bought and were turning into a retreat center.  This first group was helping us develop the property and “trying out” the program.  Thus, we dubbed them the guinea pigs.  So Tad really was coming to live with us, just not for a month or so yet.  But we made it work, because it’s awkward enough staying at someone’s house without witnessing a pots and pans fight.*

If you think I’m describing serious things too jokingly, you should hear Tad tell his stories.  The first thing I love about Tad is his sense of humor.  I have never, ever known anyone who is better at laughing at himself, at life, and at the junk life throws at him than Tad.  Tonight he described riding his long board, trying to cut through some sidewalk construction (when they have a section of sidewalk enclosed with metal bars and plywood, that sort of thing) but though one end was open, the other end had one of the bars at his face level.  He slammed into it with his face.  And he described this event with “Yeah, my black eye just went down.  Even as I was getting hit, I stopped my board with my foot, and saved it from going into traffic!  I said, ‘Oh, Man!  Come on!’  But my first thought was really, ‘Those are some good cheekbones I’ve got!'”

By “rights,” if you heard half–no, one quarter of the things that have happened to Tad, you’d say, “There’s a guy with good reason to be bitter.”  But he’s not.  He’s the opposite.  He’s mirthful.  I don’t know if I’d describe more than a handful of people in my life with that word, but Tad is.  He finds the laughter.  He makes fun of himself.  He is, by the way, the 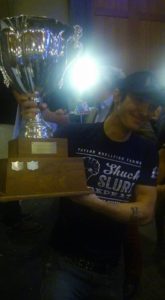 reigning World Champion Oyster Shucker.  Nope, not kidding.  Mind you, Tad can’t stand oysters.  Wouldn’t eat one if you paid him.  Okay, maybe on a dare.  The whole thing is hilarious, especially to Tad–though he did win a lot of money and that huge trophy (well, he gets to keep it for the year).

This might sound like Tad takes nothing seriously; I would say Tad laughs at nearly everything but still takes some things seriously (though himself, not so much).  Tad is a Christian. He is no one’s stereotype of a Christian.  He defies those stereotypes. He has a cross tattooed on one arm and a Romans reference on the other, yet his girlfriend (also an awesome human being) at first thought he was being ironic.  But Tad is a servant.  Tad looks after the least.  Tad is the one many people call when they’re in trouble–and I mean, people who would never call a church, or, frankly, someone like me–for help.  He rescues lost people, because he’s been a lost person and he knows both sides.

All that, a heart strikingly similar in some respects to how I understand Jesus’ heart, and yet no one would pick Tad out of a crowd, or out at a party, as a Jesus follower.  He doesn’t look like one.  He doesn’t sound like one.  But what I really mean by that is he doesn’t look or sound like standard expectations for one.  That’s ironic, don’t you think, when Jesus himself didn’t look or act or sound like the standard expectations for…himself.  For the messiah.  Drunkard?  Glutton?  Friend of people who would never call a religious person for help.

You might have guessed, this is another of the things I love most about my friend Tad.  He’s following Jesus as Tad.  He’s messed up in a bunch of ways–he’d be the first to admit it.  He’s made many…interesting choices.  He takes very poor care of himself (Tad, if you’re reading this: GET SOME SLEEP!**) and moderation is not his strong suit.  But he gets grace.  He gets it for himself and the people around him and even for the people who judge him.  He lives out being Jesus-like in a sphere of people who don’t hear much about Jesus, who don’t read Jesus books or listen to Jesus radio or go to those places where certain folks (ahem) talk about Jesus come a Sunday morning.  And he can do that precisely because he defies all those stereotypes.

I’ve discipled Tad a long time, taught him about the Bible, shared my wisdom, bailed him out a few times (not literally…that I remember) and held out hope for him–and held onto him–when it looked like he was going over the cliff.  In return, he’s shown me Jesus.  Jesus in Tad.  Mirthful Jesus.

I love the guy.

**I know that sounds ironic, coming from me, but trust me, I’m like a male lion compared to Tad.