I know, sounds like I’m getting into delirium or psychoses here, but I’m not, nor am I referring to hallucinogens.  Nope, this is a science post!

I’m not a scientist; I don’t even play one on TV.  I dwell in a world of relationships, communication, literature, biblical interpretation and application.  I do a lot of encouraging and exhorting.  But I also feel closest to God when I’m in the mountains and I have a nearly 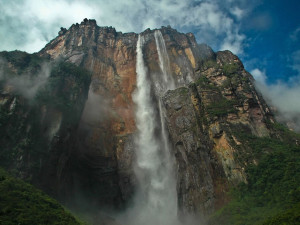 unquenchable desire to be in waterfalls–not observing them from a safe distance, but swimming up under them, climbing up or down into them, hanging over the top and feeling the spray on my face and the rumble in my bones.  I have never gotten over C.S. Lewis’s description, in The Last Battle, of the children and animals running up the waterfall.  That may capture my longing for heaven more than anything else: being with God and running up waterfalls.

So I adore nature–yes, I said it–because I am really worshiping the creator of mountains and the waterfalls that crash down from them.  Nature inspires my adoration of the Creator God.  I know God is beautiful because God’s characteristics are reflected in all that he has made.  Clouds.  I can watch clouds and sunsets pretty much until they’re gone or someone reminds me I’m late to be somewhere else.

This is a far cry from having a grasp on science, or even natural science.  But I am fascinated.

Here, then, are a few things that delight and astound me. END_OF_DOCUMENT_TOKEN_TO_BE_REPLACED

Over the (U.S.) summer, I got to visit Shadow of the Giants national recreation trail.

We had our every-four-year All Staff Gathering up above Oakhurst, CA, which is within walking distance of Shadow of the Giants, where Giant Sequoias grow.  They were stunning.  Well, both my fellow missionaries in Servant Partners and the Sequoias were stunning, for different reasons, though from the same cause (if you follow me).  All Staff Gathering is like a tiny little foreshadowing of Heaven for me.  None of us are fully redeemed, of course, and I’m pretty sure actual Heaven will make me laugh at my comparison, but worshiping God with a bunch of people who have done crazy things to live the Gospel and have mind-bursting stories to tell about how God has shown up in their slums and in their lives is officially one of my favorite activities in the world! Being around passionate, ridiculous, hilarious Jesus followers makes me want to be more like Jesus.  I’m pretty sure that’s the point. 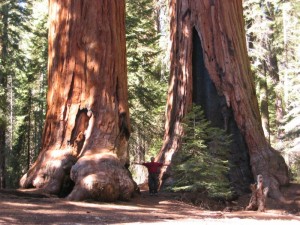 I could go on with stories about the All Staff time.  I won’t, but if you see me, I probably will.  Sequoias, though.  Sequoias grow 270-300+ feet tall, weigh four million pounds, and live for 2,000 to 3,000 years.  I mean, from when Jesus Christ was born to a thousand years before that.  They are a sermon aching to be preached.  Over their lifetime, they grow and spread 60,000,000 (MILLION) seeds, of which perhaps 5 to 6 germinate and grow to be 100+ years.  But they are nearly impermeable to fire, which was borne out by their scars from fires (how many over 3,000 years?) which ran 25 or 30 feet up–but had no real impact at all.  They did no damage.  But the Giant Sequoia actually needs fire to help it’s seeds germinate and to clear the forest floor of other trees which otherwise take over and suppress sapling Giant Sequoias.  Anyone see parallels?  Anyone else considering all the kicking and screaming against hard situations and emotional turmoil, through which God actually brings something deeper to life in us?  Maybe those times, rather than killing us, are crucial to our growth?  Or that God needs to burn away the competing things in our lives before they choke out the crucial growth, the great growth he has planned for us.  Okay, maybe that’s just me.

As I said, Giant Sequoia seeds are tiny, and it takes millions and millions of them, over a vast number of years, with fire, to have a few trees grow.  But when those trees do grow–colossal.  Immense.  Breath-taking.  In His parable, Jesus describes all the seeds that will not grow to bear fruit, but “Other seed fell into good soil and brought forth grain, growing up and increasing and yielding thirty and sixty and a hundredfold.” (Mark 4:8) Walking in the Giant Sequoia grove and being able to touch them was simply an act of worship for me.  How do I become a follower of Jesus who can stand when the fire comes and not be burned down?  How can I learn to keep loving others and planting the 60,000,000 tiny seeds from which only a few may grow–but those may become breath-taking, jaw-dropping, world-changing.  How do I learn to believe in God’s goodness, his purposes coming about, through the fire?