I was thinking of her and listening to a song, the lyrics of which said:

I think the combination of appreciating my wife more because she is sick and realizing how completely inaccurate that song is for me got me thinking.

Quick disclaimer, though: Not many people have been as fortunate as I have been, relationally.  I understand if you need to feel bitter, but please keep in mind that I was born without a sense of direction, have a nasty temper that constantly itches to get me in trouble, and very cavity-susceptible teeth.  It’s not like I got all the cards; I just got an amazing draw on this one. 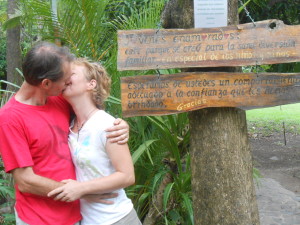 Photo credit: A daughter who was forced and took it under protest

We’ve been married twenty-two years.  We met her first week of college, so the first week of my sophomore year.  I’ve been in love with her exactly since then.  More amazingly, to me, she fell in love with me at the same moment.  I know that doesn’t work for everyone and I am fully aware that love is not the work of a moment’s twitterpation.  That being granted, we knew, right then.

I’ve been in love with Kim for twenty-seven years, and the extraordinary blessing of my life is that she has loved me back equally.  I adore Peanuts cartoons and, though Schroeder is my favorite character, Charlie Brown’s talking about unrequited love (and/or baseball) are my favorite Peanuts strips.  But I haven’t experienced unrequited love for 30+ years.

That’s probably enough to make me nauseatingly fortunate, but it’s much better than that.

I entered our marriage ready to argue and fight and raise my voice.  Kim was my own personal Gandhi, living a non-violent revolution through our first couple of years.  It’s really embarrassing and humbling to yell at someone who won’t yell back.  Kim taught me we don’t have to yell to disagree, and we don’t even necessarily have to disagree.  I tease her that she is Mrs. Rogers, as in, the female version of Mr. Rogers, because no one can get mad at Kim.

This isn’t to say she lacks strength of personality.  Earlier in the year, while walking some of her students to our little school in the barrio, she received some vulgar cat-calling (all too common here) from some drunken guys (ditto).  She ignored it.  When they started again on her return trip, she walked directly up to the men. who were all sitting on the ground, and told them (in Spanish), “I have a right to walk here without being harassed by you!  I am here, in this community, helping children learn to read, and I expect to be treated respectfully, and you won’t talk this way in front of these children.”

The men were utterly abashed, muttered apologies…and then one of them said, “Uh, I have daughters at home.  Do you think they could come to your school?”  Yes, his daughter is now a regular student at El Puente.

A few weeks later, Kim was out walking toward the school on a different road and saw a large man passed out drunk.  His head was very close to some running water and there was no way he was going to be able to move himself, nor did she think she could move him by herself.  She called out to some guys who were passing by to help her, but they laughed and told her he was going to take a bath and refreshing himself.  Then she saw that some people were looking out at her from one of the tiny shacks nearby, so she asked them.  They peered at the man and tried to decide if he was anyone they knew.  Nah, they decided, and went back inside.

Then, this same man whose daughter had started at our school walked up.  When Kim called to him, he immediately came and started dragging the drunken guy by the arms to higher and drier ground.  Afterward, Kim’s former tormentor said, “We have to watch for each other because God loves all of us.”  Less than five minutes later, we had one of our tropical downpours.  The water rose almost instantly; the rescued man would have died there.

Kim is the quiet presence who changes lives.  She has impacted thousands of students.  She has made my life.  Like every couple who has chosen to stay married, we’ve had to work hard and have endured some painful years.  Kim forgives.  She holds no grudges.  She sees the good I’m doing and reminds me when I forget.

It’s much easier to complain about what we don’t have than be grateful for what we do.  I rarely forget how blessed I am with her, but I focus too much on other (perceived) negatives in my life. To quote a beautiful, haunting song,

I never learned to count my blessings,

I choose instead to dwell in my disasters.

But I’m repenting of that.  Right now.

Kim still makes me laugh.  She forgives me, a lot.  She endures my ups and downs and supports the things I need to do to stay emotionally stable.  I’m high maintenance.  She’s not.  If you’re starting to wonder if she got a bargain, you may be getting my point.

She loves me.  I know it for certain.  I really don’t deserve it, though I want to be worthy of it.  Kim is the most evident, consistent, and persistent grace in my grace-filled, ridiculous life.

*No, she’s asleep, I’m not writing this instead of taking care of her!