Jesus tells a parable in which a wealthy landowner goes out and starts hiring folks to work.  Some get hired with the whole day to go, others get hired in the late morning, still another group get hired to work starting at noon.  One group get rounded up to begin in the mid-afternoon, and a final set of workers get hired with one hour before quitting time.  They work for one hour.

These are day-laborers, so when the final whistle blows, it’s time for everyone to get paid.  The very last workers to arrive get paid first, and to everyone’s shock, they are paid a full day’s wage.  Those who started work first, way back at sunrise, get very excited.  After all, they worked many times longer than these late-comers.  If one hour’s work equals a day’s pay, imagine how much a whole day’s work might earn!

It earns them a day’s pay.  They receive exactly the same as everyone else who worked for the landowner.  The first to work, who put in ten plus hours in the hot sun, receive identical recompense to the last ones to enter the field. 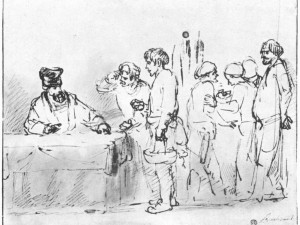 The excitement turns to anger.  “That isn’t fair!  We worked ten times longer than they did!  If you are going to pay them for a good day’s work, when they barely even started, why don’t we get…?”

The landowner seems genuinely confused.  He had paid them what he promised.  He had not broken his word to them or underpaid them.  “Friend,” he said, “Did I not do what we agreed?  I choose to give to this last worker as I give to you.  Is it not my money to do with as I will?  Or do you begrudge my generosity?:

[pullquote align=”full” cite=”” link=”” color=”” class=”” size=””]The answer, of course, is that they most certainly do begrudge his generosity. [/pullquote]
The answer, of course, it that they most certainly do begrudge his generosity.
The answer is that his generosity is beautiful and open-handed but not so much for them. For them, the landowner is merely fair, keeping his word, fulfilling his agreement.  But even his fairness seems a bit tainted now.  Someone else received much better at his hands; someone else experienced extravagant generosity, but not us.  We just got the regular treatment.  The regular treatment now feels almost chintzy.

Jesus does not fit in the boxes that we like to pull out.  I don’t know how many times I’ve seen explanations on Facebook about how socialism doesn’t work, because the people who work hard don’t receive the full reward for their work, while others who barely work receive what they didn’t work for, and in the end everyone realizes that working hard makes us no better off, so we all just sit on our butts and the whole system falls apart.

But those are just stories.  My neighbor works very hard.  He repairs motorcycles.  He has held his job for several years and he is good at what he does.  He works for a motorcycle repair shop in one of the mercados.  He has a wife and two small children.

Last week, he came home after a full day’s work having received only eighty cordobas.  The exchange rate is currently almost 30 cordobas to the dollar.  He made less than three dollars for his full day’s work.

He’s trying to decide now whether he can make a go of starting a repair shop out of his home.  His family is going hungry.  He can’t allow that.

Now, instead of reading the parable through the lens of “welfare cheats,”–which many seem haunted by but I’m not certain how many of us actually encounter in the flesh or know by name–consider it through the experience of our friend.  We’re sharing meals with them and trying to offer a little work to help them earn enough to get through this.  If our friend were in a parking lot with an hour to go before the workday ends, it wouldn’t be due to laziness or some cunning that “perhaps I could get hired late and still get paid the same.”  He would be there out of desperation that even a couple bucks or whatever an hour’s work might get him would help a little and be worth it.

If he were asked, “Friend, why are you still here so late in the day?” he could easily answer, “No one would hire me.”

Try to imagine his response to getting hired for that one hour, just to do anything it takes to buy food this week, but instead of receiving one hour’s pay–or the couple bucks he was underpaid for a full day–he is handed a generous day’s wage, instead.  How much do you earn for a day?

“So the last will be first, and the first last.”

What was Jesus trying to tell us?  What if God is kind and forgiving to people who have screwed up more than we have?  What if, while we were trying to do good, someone else was just pulling all kinds of crap, and we were secretly hoping to see them get theirs–not in the nice way–only to watch them treated just like we are?  When I pull more than my weight on the “volunteer” committee and someone else pulls less, but we are equally recognized?  When someone else’s lesser effort earns the same bonus that busting my butt gets me?

Second, have we come to hold our economic views higher than the words in red?  I really mean this.  Does Jesus inform our economic principles, or do our economic principles shape our understanding of Jesus?  Do you know a person in your life who cheats the welfare system and gets benefits unfairly?  The only person I know who might qualify for that description used to work half a year at a very hard job and then sit around and play video games or go hunting during the winter and receive unemployment checks.  He was very conservative in his politics and saw no inconsistency in what he did.

Our Nicaraguan neighbor is much more typical of the people I have known, who struggle against poverty and try to keep their children fed.

Finally, do we have empathy?  Not pity for “those poor unfortunates,” but genuine empathy, in which we put ourselves in others’ shoes by relating their suffering to our own.  I think when grace offends us, our imaginations have failed…or maybe they have worked too well. 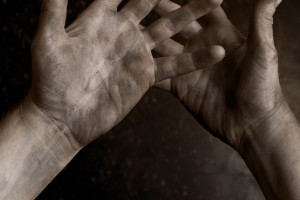 We fail to imagine that we could be going hungry, that our children might come to us and we have nothing to give them.  Or else we imagine that we are never going hungry because we are more righteous, because we have earned God’s favor and that’s why we were born to well-off parents and received a sound education and enjoyed security and privilege.  What does it mean when we have all we need and most of what we want, yet we’re deeply offended that we might have to give up a little to benefit people who are hungry or sick.  Tonight.

When Jesus says, “The last will be first, and the first last,” and we are currently the first, that demands a response. 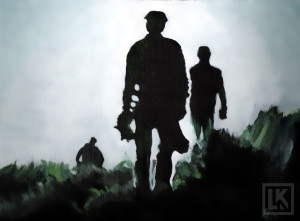 Don’t mistake Jesus for one of the politicians promoting a fanciful economic system.

Jesus says, the kingdom of heaven is like this.

We aren’t debating whether this is a nicer way to treat workers, or a more equitable means of disbursing profits.  Jesus says the kingdom of heaven works like this.  Are we trying to advance this kingdom in our world?

Or are we offended by its generosity?