I have a friend who is a genius, a prolific artist whose work is unbelievable. They are brilliant and creative.  I’ve also told them many times, “I would be terrified to be inside your head.”

Today, I was talking to another good friend, a great guy (and coincidentally–or not–also an artist) who told me he’s learning not to trust what goes through his head.  He believes things about the world and about himself that aren’t true, then pours massive time and energy into those fears and imaginings. He explained the discipline he’s developing of reminding himself that he trusts God instead of these thoughts.

Anne Lamott says, “My mind is a bad neighborhood I try not to go into alone.”

I’m learning to have peace with my own mind.  Or, as Bill Mallonee sang with Vigilantes of Love,

“I’ve been trying to negotiate peace with my own existence.”

That’s a great picture for me.  When I talk about how it takes a lot of energy just to be me, this is largely what I mean.  I don’t know how it is for anyone else from the inside, but I watch people who seem to go about their day just dealing with what comes at them from the outside.  As if they’ve got their inside fairly coordinated to work together and help out with whatever comes their way.  It looks nice.  My experience is a little different than that.

Have you ever wondered where all these negative thoughts come from?  Honestly, many Christians talk as if Satan is responsible for all those negative thoughts, but wouldn’t that mean he is omniscient, more or less?  When I’m standing in my bedroom, deciding which shirt I’m going to wear, and suddenly I have the thought what a disorganized idiot I am, clearly a direct response to my pawing through my shirts, where did that thought come from?  Why is there a part of me that hates me and continuously seeks to antagonize me?  I don’t really believe that Satan can read my mind, and that’s what it would take for him to be piggybacking on my thoughts the way these negative ones do.  Satan is neither omnipotent nor omniscient.  C.S. Lewis pondered this in The Screwtape Letters and suggested Satan cannot read our thoughts but can distract and antagonize us.

I know some of you don’t believe in Satan’s existence, but I’m not sure it’s any more comforting to me to think that the vicious daily attacks against me are just…me.

Here are a few of the patterns:

“You always do that!”

“You’re doing it again.  This proves you’re hopeless.  Do you believe me now?”

And sometimes, on the really good days,

Yeah, that’s a thought that plays in my head.  Not infrequently.  Does it in yours?  Like I say, the people who get to do their jobs, just try to get done what needs getting done, without the pleasure of such an inner dialogue, they have some privileges they probably don’t appreciate.

About eight years ago, God told me, “Never say anything about yourself that Jesus doesn’t say about you.”  Since I’m pretty sure Jesus doesn’t say “Oh, myself, I hate you!”, I do my best not to say that.  The thought often comes unbidden.  Again, where does that come from?  I didn’t intend to think that.  But negotiating peace with my own existence, for me, means recognizing when the thought hits and consciously reminding myself, “That is not what Jesus thinks; that is not how God sees you.”  Then I do kind of a tai chi move against that thought and use its own force to let it tumble on through.

Another image that’s helped me is the fishhook.  A wonderful late mentor, Rowena, taught me that those negative thoughts and emotions are like baited hooks floating by.  I don’t have to bite down and poke the hook through my cheek and get drug around on that line.  But it’s tempting.  That thought has an emotional draw to me that lures me (see what I did there) to bite.  As I negotiate my peace, I become more conscious of the hook, less induced by the bait, more mindful that I have not enjoyed having a bloody, punctured face or flopping around out of control while the line yanks me.  All of this is simile, of course, but the time and energy sucked down by those thoughts is quite literal and real.

I’m really curious, for those of you who also deal with thoughts like these in your own head, what works for you?  How do you disarm them or take away their power?  Does anything help you to ignore them?  What have you learned about negotiating peace with your own existence?

In addition to the strategies I described, the other thing that helps me is remembering that I never win arguments with myself (or Satan) about my own faults and shortcomings.  When I get suckered into hunkering down and trying to fight back, I lose.  Every freaking time.    I know why.  I don’t, and can’t, justify myself before God.  Jesus Christ justifies me.  I can’t win the argument over whether I’m good, or even good enough, because I’m not and never will be. This isn’t because I lack self-esteem, but because I grasp what a sinner I am.

Here’s a truth:  trying to take Christianity only halfway will wreck us.  I mean, big time.  This is a fine example:  fully comprehending what a wretch and sinner I am without equally internalizing God’s love and forgiveness leaves me breathing toxic fumes, all the time.  Strange as it sounds, trying to win the argument over whether I’m good or bad is a mental version of trying to be righteous on my own.  I don’t run around trying to earn my way into heaven by doing good enough stuff.  That’s not how following Jesus works.  So why do I try to defend myself that same way, fighting back that I’m “not so bad,” or that I can answer the accusations?

Taking Christianity the whole way means grasping that giving in to the negative voices or trying to shout them down is futile and both will leave me equally despondent.  God has an answer:  none of those accusations matter.  Even if I am all the things those voices say (I’m not), God means not only to forgive my evil (let’s call it what it is) but to redeem me and bring good through my ridiculous, blundering life.  If I don’t believe Jesus can forgive and redeem me, then that means I think I’m better at being screwed up than God is at being God.

Speaking honestly, some days I think that.  God forgives my unbelief, as well.

Then an older woman who had been waiting to cross came out and glared at me.  I tried to shrug and smile, say, “Sorry, what can you do?”  She wasn’t having it.  She told me what she thought of me as she walked around my car.  She actually turned back and nearly walked backward so she could continue castigating me as she reached the other side.

I saw red.  An impulse to fight back, to defend myself, to express my displeasure at my situation and her judgment of me rose up…along with my hand.  But I held that in check, the car in front of me finally moved, and I drove on, adrenaline gushing, heart pounding.

And God said, right then, “You don’t have to justify yourself.  I justify you.”

That moment changed me.  I didn’t do anything wrong.  I couldn’t have foreseen the car would stop there.  But I felt the need to justify myself.  I could have shouted at the woman, “It’s not my fault!”  I could have spent the day arguing in my head, defending myself to (imaginary) her.  But God showed me I didn’t have to.  That isn’t my job.

That’s my contribution to this discussion, though I know there are other ways to approach it.  I don’t always remember to apply this truth, but I believe it and it helps.  I don’t know why the voices are there or why they’re so loud some days.  But I don’t have to shout them down.  I don’t win that way.  I sidestep and ask Jesus to weigh in.  If Jesus doesn’t say this about me, then I’m not buying it from that voice in my head.

“He it is who gave himself for us that he might redeem us from all iniquity and purify for himself a people of his own who are zealous for good deeds.” 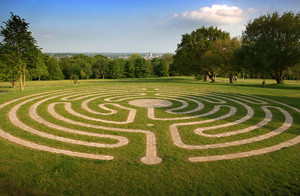