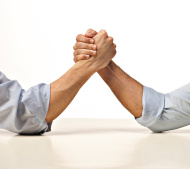 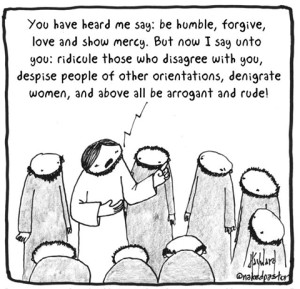 To be clear here, I am part of this “we.”  Here are the steps I have taken to prevent this:  I have helped organize a discussion group with members from various points on the political spectrum; I have largely limited my political expression to the point I feel most crucial for the United States’ future, which is preventing Trump from becoming President, and I have done so because I believe his candidacy is fueled by division, fear and hatred.  I don’t know how to lovingly oppose his candidacy, but I am trying.

Let’s really think about power for a moment here.  What do you have power over?  Your daily decisions.  The specifics of your life.  Large-scale political decisions?  Not so much.  Policies affecting the entire United States?  Unlikely, unless you happen to hold one of the few high seats of the government or are in the 1%.  I’m not saying you have no influence–I do believe in the workings of democracy, since I refuse to be a cynic–I’m saying you and I don’t have power over these things.  We don’t get to decide.

The things about which we get to decide are our treatment of others, our interactions with our children/parents/family members, our time spent in prayer, meditation, reading Scripture and other truth. We get to decide how much time we spend on Facebook.  We get to choose whether we read the comments or not.  We get to pick what we do and don’t eat, whether or not we exercise, and, for most, when and how much we sleep.

Yep, that’s the range of our power.  There are other things.  Really important things.  How we spend our money is a big deal.  At least, if Jesus is to be believed, which I have decided he is.

Perhaps the biggest single factor over which we have power is 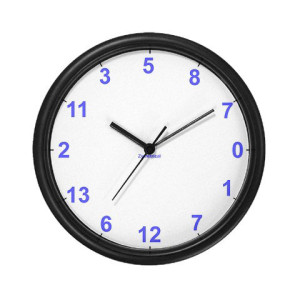 how we spend our time.  Time is our most finite resource, non-renewable, precious, and elusive in it’s nature–it doesn’t seem to be running out until it actually does; trying to grab it only causes it to slip through our fingers like mercury, and worrying about it escaping seems to cause us to spend it worse instead of better.  So that sucks.

I’m going to digress for a moment (“Tangent!”) but I promise I will come back and that this will relate.  When our eldest daughter became a senior in high school, I was very tempted to get sad because I could see how quickly the time would go.  God said to me, “Don’t be sad now and miss it.  Live the time you have with her.”  I’m so enormously grateful for that.  I lost count of how many times I reminded myself to follow God’s “advice” (I’m guessing we should use a different word here).  Her senior year was hard.  It had moments of searing pain.  She was treated badly.  We shared moments of hilarity.  I don’t know if I did a great job, but I was present.  I didn’t get depressed about her leaving ahead of time.

And she left.  She graduated, she went to college, and now we mostly exchange messages and occasionally talk on the phone.  I miss her like an ache in my bones.   But she has her own life and God’s got a cool and ridiculous and mind-shattering plan in store for her life that he’s bringing about now, with her living a long way from us.

[pullquote align=”full” cite=”” link=”” color=”” class=”” size=””]We want power over things we can’t control and we fail to act on the things we can.[/pullquote]

Connection:  we want power over things we can’t control and we fail to act on the things we can.  The one leads us to frustration and bluster and acting hatefully (the opposite of Jesus’ command above) and the other to deep regret and sorrow, maybe even depression and despair.

I’m not saying politics are unimportant; they’re crucial.  But we need to involve ourselves in them as members of a Kingdom that seeks to turn the world upside down with love and offend the world’s powers with grace.  Building walls and fences and trying to keep the enemies out of our ideological camps is the absolute antithesis of how Jesus behaved with people.

When we admit to ourselves and acknowledge to others that power, the desire for power, drives our debates and fuels our behaviors, we begin to break it’s hold on us.  Tony Campolo taught me, many years ago, that you can’t simultaneously pursue power and love.

We do have power.  God gives us authority in different areas, and using our gifts and exerting influence is crucial for participating in God’s Kingdom.  It’s certainly not inherently bad.

But, the pursuit of power is dangerous, and leads us into a paradox.  When we seek power, we move away from love. Jesus taught us to lead as servants, not tyrants.  We gain in authority by seeking to serve others, actually putting ourselves below them.

We might discuss here whether power and authority (or influence) are the same.  I think that’s an important discussion.  But I’m not trying to quantify perfectly these terms, because that can become a rabbit hole discussion.  Police have power as well as authority, and I hope they use both in a godly way.  Spiritual authority is given by people, not wrested from them.  If you have to demand it–the way my dad sometimes yelled, “I am the father!”–you’ve forfeited it.

I don’t believe power is inherently evil–the quote “power corrupts and absolute power corrupts absolutely” is so efficient and profound, and I’ve certainly employed it, but it oversimplifies the case.  Sin corrupts, and merely having power is not sin.  Seeking power can be sin and often is.

[pullquote align=”full” cite=”” link=”” color=”” class=”” size=””]How we wield the power we have, how we desire more power and choose to pursue it, those are the forks in the road between the narrow path we desire and the wide path that desires us.[/pullquote]

How we wield the power we have, how we desire more power and choose to pursue it, those are the forks in the road between the narrow path we desire and the wide path that desires us.  Hunger for power, like the love of money (and those may be synonymous) quickly replaces the territory grace occupies in our hearts.  Seeking more power in response to this hunger, whether motivated by fear, frustration, or pride, blinds us to our sin (convenient, since it also provides fertile soil and the darkness needed for those to grow) and deafens us to the voice of compassion.  We start to call compassion nasty names–“idealism,” “bleeding heart,” “laziness,” “irresponsibility”–forgetting that Jesus acted on the compassion he felt all the time:  “Jesus, moved with compassion…”

People can be wrong and sinful and make all manner of stupid and self-destructive choices and we can still feel compassion toward them and act on it–like Jesus does with us.  If compassion starts to look stupid and impractical, that’s a screaming red alert that we’ve left the path of the Servant Master and gone after that other Master, instead…the one God warned Cain about.

I confess that people who hold views diametrically opposite to mine seem stupid to me and I tend to judge them.  I confess that I often enter discussions and disagreements seeking to reinforce that I’m right and/or convince others that they are wrong.  I confess that more power looks pretty appealing to me, also.

But I know that siren song.  I’ve heard it before.

3 thoughts on “What about Power?”