We have dogs.  We have three dogs who serve the crucial function of protecting our house.  We live in an impoverished barrio where a lot of theft happens.  I get that.  People don’t have enough food, people don’t have what they need, so it’s tempting to figure out how to steal things.*  That comes with this territory.

I get it, but we also have to guard against it (having compassion doesn’t mean it’s good for people to be able to steal from us).  Therefore, we live in a house that has a gate and walls around it.  Therefore, we have three dogs. 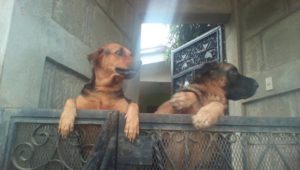 Many Nicaraguans are scared of dogs and for good reason. I’ve had many conversations with poorer Nicaraguans who can show me a scar where a dog bit them.  Kim was out jogging once and watched a wealthier Nicaraguan let his dog run out the gate, attack a ragged-looking guy walking on the street, and only when she approached did he call his dog back in. 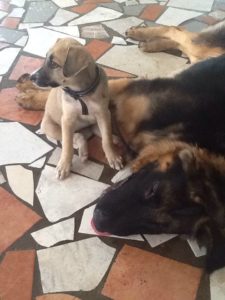 Two of our dogs came from friends here and one was a puppy whose mother was a street dog rescued by missionaries.  Mumford is a Belgian Shepherd, Zoe is a Rottweiler mix, and Sonny is a mutt who looks just like all the other short-haired yellow mutts on the street.  Mumford has an  enormous head; when he opens his jaws all the way, he looks like he could put your head in his mouth.  Zoe has a huge chest (plus she’s a little fat) and a deep, threatening bark.

And Sonny?  Well, Sonny is the one who would actually bite you if you snuck in and ask questions later.  The other two would wag their tails and lick you, or maybe run out the gate if you opened it.  We joke that we have three guard dogs: two are for show, while the little skinny one would protect the house.

This morning, we had one of those getting-the-family-to-school mornings.  But this one wasn’t caused by our kids arguing or dragging their feet or falling back asleep.** This morning, Mumford made a run for it.  Twice.

Now I have to explain two things quickly:  Kim loves Mumford and we have a new road. 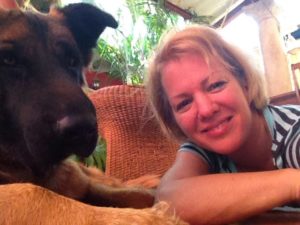 Mumford and Kim, also providing perspective on just how big his head is.

Kim has adamantly insisted that we are taking our 120 pound giant-headed dog back to the U.S. if and when we ever return.  The kids complain that she loves him more than she loves them.  She denies it.  They produce evidence.  I’m not weighing in on that argument (I saw her give birth to them, so I know her commitment level), but two of the dogs live outside and the third comes and goes through the house as he pleases when she’s home.  He gets to eat separately from the other two because he’s a slow eater.  He’s pampered.

I’ve chronicled our experience of living on a rutted dirt “road” and then finally, finally having a beautiful new road laid before our eyes.  It still feels like a luxury.  The downside is that people now drive fast by our house when before they had to pick their way through the hazards.   Our son had a near-miss on his bike the other day which I may write about eventually, when it stops making me sweat cold to remember it.  Or I may not. 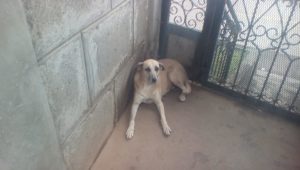 So whereas before we could let the dogs out and have them run up and down the road a bit–thus getting them exercise and reminding would-be thieves that we have huge, intimidating and not entirely-controlled dogs–now we can’t risk that for the danger of their getting hit. 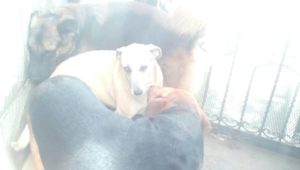 People think it’s “a pack” of dogs; the proper term is actually “a confusion of dogs.”

Then there was this morning.  Mumford goes charging out into the street.  Kim doesn’t exactly panic, but it makes her very nervous.  I’m trying to feed the other two less-spoiled dogs.  I go chasing out after him.  For once, he obeys relatively quickly (his training, such as it is, doesn’t usually extend to when he’s out roaming the streets) and comes back.  We’re at the two-minute mark for leaving for school.  I put Mumford in the back, discover that my last piece of French toast is still cooking, then also realize I’ve fed Zoe but not Sonny yet–and Zoe is a bully who will gulp her own food down and go for the others’ in a split-second.  I learn these things because I’d chased Mumford into the street with our dogfood dispenser in one hand and a spatula in the other.

So I go back out to feed Sonny. I set down the container from the French toast mixture to keep Mumford distracted.  But while I close the back gate (the one between the carport and our outdoor sitting area/kitchen) behind me, I don’t reattach the carabiner that holds the latch closed.  Mumford shoves the latch aside with his massive snout and goes charging by me out into the street, again.

At this point, our friends the Ndoros, with whom we carpool–we drive in the morning, they drive in the afternoon–are arriving.  They look a little nervous that I’m rushing past them, shouting “Mumford!”, but they’ve seen our crazy before and they get in the car.  I again convince Mumford to come back inside before he’s run over and try to herd him to the back again–but he disappears. I’m convinced he pulled the freeze tag trick of running one way around the car, having me follow him, then going all the way around and out again.  But no.  He’s not back out.

Yep, he’s sitting in the front seat, until I try to retrieve him, at which point he climbs into the back seat, over the kids.  Not our kids.  Because if you’re going to have your huge, muddy dog (did I mention it’s been raining for the past 18 hours? Did I mention he ran out twice?) climb over young people dressed in their clean school uniforms, best to have that be your friends’ kids, for maximum embarrassment.

It is now T+several minutes past departure time.  Mumford finally agrees to leave the car more or less willingly, apparently somewhat nervous at my (ahem) urging–did I mention I’m still carrying the spatula?–and I can’t even look to see how those kids are doing or what their uniforms look like now.  Our children close the doors, Kim pulls out, and Mumford trots happily to sniff at his food which he still won’t eat yet.

I’m about to rescue the last piece of French toast when I hear Kim yell, “Mike?  The car won’t shift.”  She’s pulled out, but now it won’t go into gear.  Oh, that car.  A friend had just bailed me out last night by taking the gear shift apart and fixing the problem  when it wouldn’t shift (a clip had fallen off–does not give me confidence about the sturdiness of construction) and this after being in the shop 6 weeks for a broken head gasket and then back with us for four whole days before the starter went out.

But then it did shift and she got to school okay and the car is also a post for another day.

The French toast burned solid black.  I fed it to Zoe. 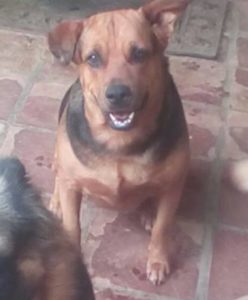 *Before you get on your high horse about hard work and bootstraps and providing for yourself, come see what finding work looks like in a country where there’s 50-70% unemployment.  Then we’ll have that conversation.

**Hypothetically speaking, of course.  These things never happen at our house. 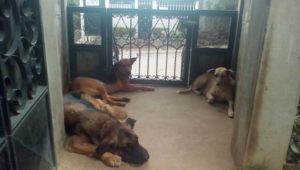 The Team on high alert, ready for anything.

5 thoughts on “Who (actually) Let the Dogs Out”