You got a traffic ticket.

Most of you have had this experience, so stop a moment and consider what that’s like.

You’re driving back from a family getaway and you change lanes.  You’ve been driving about the same speed as everyone else, averaging 70 kph, with the usual mix of pedestrians, food sellers and window washers, plus taxis and buses crossing back and forth, cutting others off, stopping at their convenience and backing everyone up. The driver ahead of you slows down, for one of a hundred possible reasons, so you switch from the left to the right lane–and a policeman immediately steps out into the road maybe 30 yards ahead, waving his arms, indicating that you have to pull over.  He stands squarely in the lane until you’ve come to a stop. 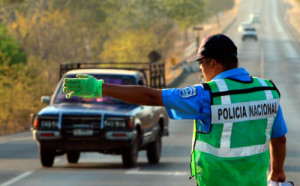 He asks for your license, registration, ID card and insurance.  You give him all of these.  He tells you that you changed lanes illegally.  He speaks very fast.  He suggests that for about ten dollars and eighty-three cents, he could just take care of the problem right here.  But you’re not totally sure you’re tracking and usually patience and politeness do the job, so you apologize for what you did wrong.  He asks where you live and how long you’ve lived there.  As you’re answering these, which you know are standard questions and usually lead to a couple other questions and then a polite or brusque return of your documents, he is suddenly writing very quickly and less than thirty seconds later he hands you a ticket–for about forty dollars–keeps your license, and walks away.  He said something about “transit central.”  Now you’re driving without a license, owe forty bucks, and have to figure out how to get your license back.

At this point, it’s very easy to Monday morning quarterback, or backseat drive, and second-guess whether you should have given the bribe.  Ten bucks.  The rest of the drive home is very quiet.

The first and most crucial guess is where to go.  You can pay the ticket at any bank, literally any bank that has a teller is supposed to take your money and give you the stamped, signed form that says you paid your fine.  That part isn’t difficult, and involves merely standing in line and handing over the cash.

No, you now have to guess where they have taken your license.  Because you were halfway home, it could be in your home city of two million people, probably at the police station where they generally take licenses for traffic infractions, but not necessarily.  There are several police stations in your city at which your license might now be residing.  But, it could also have been taken back to the city you had already passed through.  There are no phone numbers to call, no clerks who will check for you, no database to confer.  It’s just somewhere, and you are left to guess where…before you get pulled over and found to be driving without a license, for which you can be put in jail.  At the very least, you will be encouraged to pay a much larger bribe to avoid this.

But hurrying won’t necessarily help, either.  For some reason, there is a delay between when your license is taken and when it arrives at a police station.  This delay is 3 to 10 days, or more, or less.  You are clearly out of your depth, so you contact a good friend who has traversed these waters, and thank God that you have such a friend.  You discuss it and he suggests that you wait exactly one week and make the drive back to the city you had already passed, since you might have been closer to there when you were pulled over.  He also agrees to go with you.  Again you thank God, and you thank your friend.

Exactly seven days after your incident, during which you have been driving very cautiously and nervously (and with your expired license at hand, in hopes that will get you by, should the unfortunate need arise), you head out early in the morning with your friend.  He drives, to minimize Murphy and his Law that you can feel stalking you.  The drive is about forty minutes.

He takes you to the police station, you walk through (as a recon mission), then walk two blocks to the bank.  It’s a large police station, and you soon realize that this is a special bank window, external to the building, which serves this express purpose: you are all paying your fines.  It takes you about an hour to reach the front of the line, at which point you pay, get your change, sign a document, and your friend has to provide identification which is recorded in case you are trying to pass counterfeited currency. 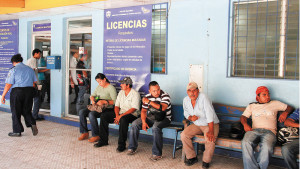 Not the station I was at. It didn’t seem a good time for photography.

Then you return to the police station.  It is very full, with perhaps a hundred chairs lined up in several sections facing six or seven different windows with clerks sitting behind them.   On the far side of this large rooms are doorways to several more rooms.  BUT…to your left is a small room, no windows, maybe eight by ten, with a little sign above it that says “Traffic Inf.” Your friend leads you in.

Thirty to forty men have packed themselves into this room.  It’s warm.  No air flowing.  Everyone is scowling.  Nearly everyone is standing, staring forward, waiting.  Suddenly, they are lunging forward, each reaching their tickets as far as possible toward the clerk standing behind the counter.  You’re bewildered.  You look at your friend.  He shrugs, and you join the melee.  You’ve been to rock concerts where people respect personal space more.  For the next two and half hours, you stand in this room, standing idly, shoving forward, standing idly again.  It feels like you’ve become the tide.  A few people are friendly and want to commiserate, laugh a little, exchange cynical comments.  A very slow trickle leaves the room, a quicker stream enters the room, so it gets more crowded.  Three or four women come in; however, all but one of them have men who are doing their shoving.  You feel bad for the one who is trying to make it to the front for herself.

You ask your friend why they conduct the rest of the police business in the building through taking numbers and waiting in line and only in this room do they have a free-for-all.  He has no idea.  But he tells you that if you complain or manage to get on the wrong side of the people behind this counter, your license may never appear.  There are many stories like that.  He once had a serious problem with the license plate on his motorcycle–he’d bought the motorcycle from someone else, but somehow that plate had been identified on a vehicle involved in a crime–and he’d had to return to this station a number of times. You ask how many?  Ten, he says.

After about an hour-and-a-half, your friend finally succeeds in getting a clerk to take your paperwork.  The clerk disappears for twenty minutes.  When he comes back, he confirms that your license is here.  Only now are you pretty sure that you’ll get this done today, in one trip.  Nothing is certain, mind you, but it looks good.  You celebrate by going outside for a minute to buy a cold drink–there are several vendors right outside the door, for obvious reasons.

But you dare not stay out of the room for long, because if they call you and you aren’t there…game over.

The next hour is easier, relatively.  You wait.  You don’t have to fight for the front, you just have to be there, sweating and watching the tide, until finally your name is called.  During this time, you look at all the others in the room more sympathetically–you’re no longer competing with them, after all–and wonder what jobs they are missing for this.  How many work hours are these men losing, how much are their employers losing?  Your friend tells you that employers are required to give a day off without firing someone so that they can deal with their ticket.

What if it takes more than one day? you ask.  He shrugs.

Your friend elbows you in the ribs.  They are calling your name, though you would never have recognized it as your name.  You push forward-excuse me, excuse me–and grudgingly people step aside far enough that you can squeeze through.  The clerk, a tall man in glasses, shows you where to sign and then tells you that these are private documents; it’s a bad idea for you to be letting your friend handle them with you.  You swallow the first five comments that come, and thank him for his service.

Then, shockingly, you are out of the room, back in the open air, walking away, license in hand.  The day is yours again.  You’re back on the right side of the law.

But you ask your friend to drive back, to where you can buy him lunch, just to be sure to keep out of Murphy’s reach.